Butt-hurt Climate Scientist® is butt-hurt about the political situation:


The climate change debate that has raged in the public forum in Australia—and, in similar form, in the United States—has unfortunately been governed more by politics, ideology, and money than by facts. For example, much to my dismay, after appearing on a television program in Australia, on which I ended up debating a senator from the governing Liberal Party on issues that included climate change, I offered to come to his office to show him data on climate trends, including sea level rise and ocean acidification, with the hope that the data might affect the policies he advocated. He told me that he wasn’t interested in such a discussion, because he had a constituency that supported his current opposition to carbon emission controls, and that is what mattered to him.

You don't say.  And why might that be?  Perhaps the cost to Aussie consumers?


Prime Minister Tony Abbott's conservative coalition government rose to power last year on the promise of getting rid of the tax, assuring voters that removing it would reduce household electricity bills.

Perhaps our brace Climate Scientist® would argue that the cost of energy will not rise when it is taxed?  That argument would be a novel one, and seemingly one that the Australian voters are not buying.  But Our Hero continues:


Of course, as a scientist, I feel particularly strongly that the public is ill served by politicians who ignore empirical evidence while making and speaking out on policy.

Let me fix that for you, putting it into terms that the Australian Senate (and voting public) no doubt considered:


Of course, as a scientist Senator, I feel particularly strongly that the public is ill served by politicians scientists who ignore empirical evidence while making and speaking out on policy.

Observe the climate models, where over 100 different computer simulations have made predictions of rapid warming that simply have not been seen.  These models are increasingly wrong, and essentially none of them have predicted that warming has not only stopped, but has stopped for 17 years: 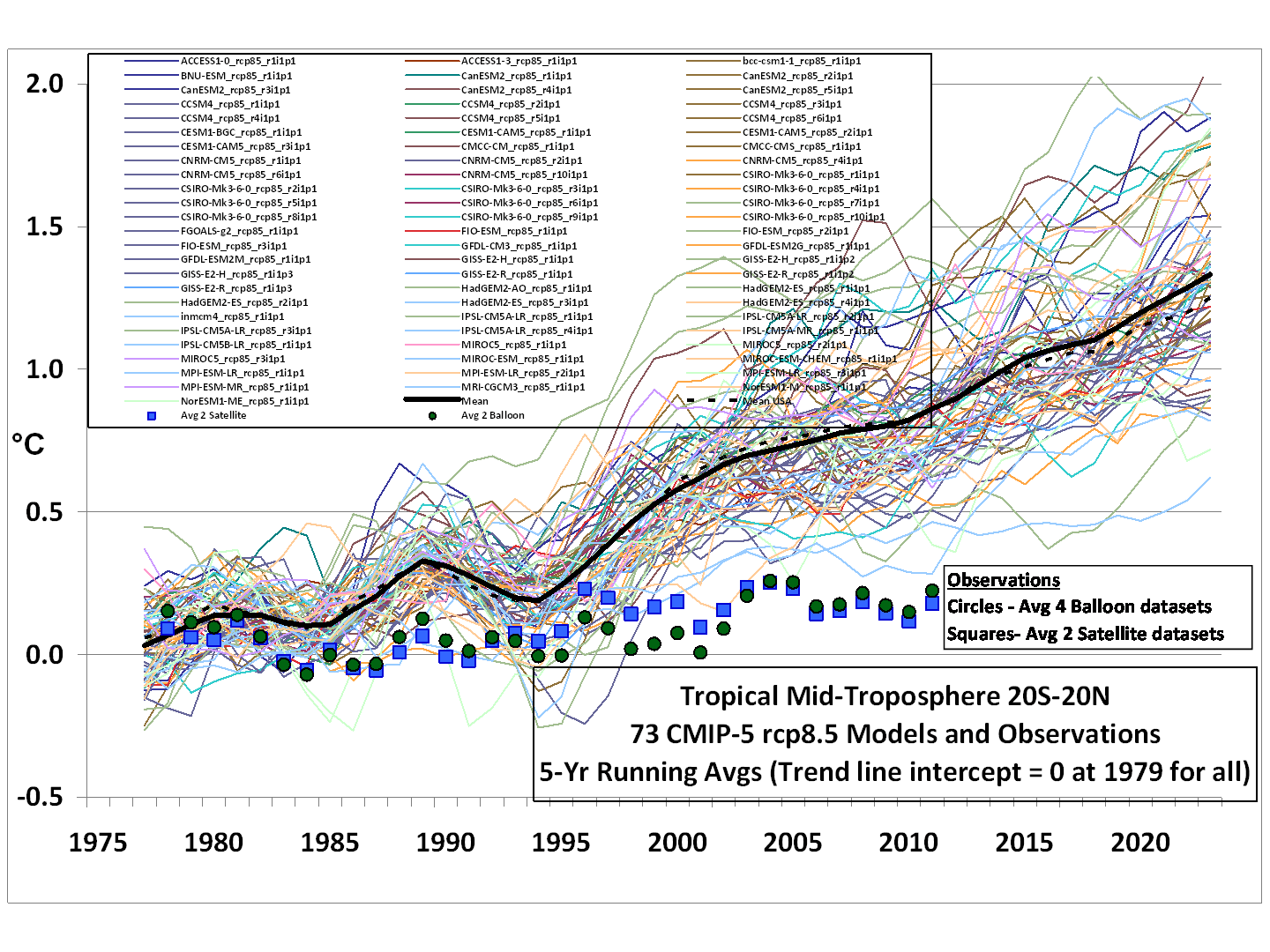 Policy, meet empirical evidence.  Of course, the Climate Science® establishment has an answer to that:


The publisher of Environmental Research Letters today took the bizarre position that expecting consistency between models and observations is an “error”.


The publisher stated that the rejected Bengtsson manuscript (which, as I understand it) had discussed the important problem of the discrepancy between models and observations had “contained errors”.

But what were the supposed “errors”? Bengtsson’s “error” appears to be the idea that models should be consistent with observations, an idea that the reviewer disputed.

Translation: pay no attention to the models diverging from reality.  The Great and Powerful Climate Science® establishment has spoken.  But please, let's continue with our butt-hurt scientist™:


Oklahoma Republican Congressman James Lankford’s amendment prohibited funding for "proposing or implementing any executive order related to the 'social cost of carbon.'" In this way, the Energy Department would presumably be prohibited from embarking on studies that might calculate the possible benefits of legislation that limits carbon dioxide emissions or the economic risks associated with climate change.

Maybe the voters in Oklahoma don't have any more confidence in the busted climate models than the voters of Australia, and a similar lack of appetite for Green boondoggles with the corresponding higher costs and higher taxes?  Maybe the voters of Oklahoma think that the scientific research they are being asked to pay for should benefit them, not cost them?


A second amendment by Arizona Republican Paul Gosar prohibited funding for the Energy Department's Climate Model Development and Validation program. One of the things that climate change deniers often pull out of their hats when arguing against acting to stem climate change is a claimed skepticism about the validity of existing climate models. I have recently countered one such skeptic on television here in Australia by accepting this skepticism—and then challenging him to present what his models predicted.  (Of course he didn’t have any).

And how to say this politely?  I'm not paid by the taxpayer to make a computer model that doesn't suck.  You (or the other Climate Science® establishment) are.  We pay you a fucking LOT of money to come up with a lot of climate models.  THEY. ALL. SUCK.

I want a fucking refund from you, you poser.  But let's continue with the poser's scientist's complaint:


A third science-defunding amendment, this time pushed by West Virginia Republican David McKinley, would prohibit the Energy Department from supporting climate change activities associated with the National Climate Assessment and the Intergovernmental Panel on Climate Change report.  That's right: The Energy Department would be prohibited from responding to the two landmark reports that reflect the best international scientific scholarship available on climate modeling and the possible impacts of human greenhouse gas production, locally, nationally, and internationally.

The "best international scientific scholarship?"  You mean from the University of East Anglia (lead authors of the IPCC reports)?  The ones who did the whole "hide the decline" thing?

Let's sum up: all of the models are wrong, the Climate Science® establishment waves their hands saying nobody would expect the models to tract to reality, and the "best international scientific scholarship" relied on by the IPCC are busy hiding the decline.  None of this is in dispute.

And butt-hurt Climate Scientist® wonders why elected bodies world wide are reluctant to keep funding this same cluster fsck?  Look, I can understand how some Government funding gets diverted to hookers and blow, but the rest is just wasted on the current establishment.

More climate hookers and blow, please.  Let me sum up once again:


Of course, as a scientist Senator, I feel particularly strongly that the public is ill served by politicians scientists who ignore empirical evidence while making and speaking out on policy.

No need to thank me, Dr. Krauss, it's all part of being a full service climate blog.
Posted by Borepatch

I have a friend who means well, but his attitude is very much "we've got to do something!" I finally got him to slow down and think by saying, "Okay. Will you give up your job to prevent climate change?" I don't think it changed his mind, but I think it gave him a clue about why people resist policy changes based on inaccurate, or at best uncertain, science.

Dave H: Stop forcing people to "put up or shut up" by showing them the possible results of their own kool-aid-y reaction to people screaming "I'm a scientist!!!" All it does is piss them off, and that's when they stop buying the beer.

Di you just drop the f-bomb? Borepatch is starting to sound like me...

That's not really a good thing.

I have a potty mouth, er... keyboard.

I can definitely understand how a guy could get upset by all of this. The fact is, those of us who aren't on the apocalypse bandwagon are tired of our opinions and statements being misrepresented.

I'm not a "denier." I actually think that increased CO2 will increase global temps - slightly, non-catastrophically, and to little or no real meaningful effect. This is, by the way, the same "consensus" that 97 some-odd percent of scientists agreed to in the survey that the warmists flaunt as "proof" of their "catastrophic" theory, when it is no such thing.

Again, I find it interesting that the global warming (Ahem, Climate change now!) crowd insists that anything that disputes or invalidates their findings must be funded though big oil, coal, beef company research to find there to be no warming! But that is entirely different from when the .gov crowd funds someone to study global warming. I mean of course if they find there is no warming the funding would stop and they could declare victory right? No emergency that's supported by funding that in no way is similar to anything else?
No?

Yeah, Goober. This guy really set me off.

Here's my model: a roughly-horizontal, low-magnitude sine wave that peaks about every 11-11.5 years, coinciding with the solar cycles (I could work out the "Y=" formula if they really want it).

Oh, look: Your model may be "hotter," but mine more accurately reflects reality.

I have a model that has been refined lately.

It's a simple model, but it seems to be statisically correct, to within fewer percent deviation than the models our host cites by graph.