If you're playing fair when you're getting shot at, you're missing the point 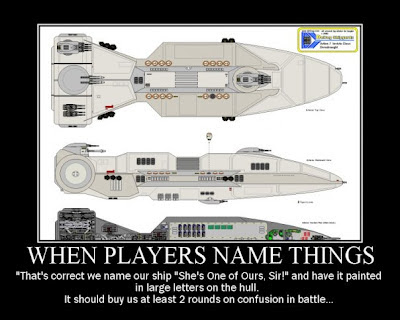 You know what they say: if you're playing fair in a gunfight, then your tactics suck.

I also like the certain level of irony in the fact that you have this up today, while yesterday you were condemning the wartime actions of one General William Tecumseh Sherman.

Mama Gaea has a vicious sense of humor sometimes...

Thanks for the chuckle, AND the reminder!

One wants to be careful with this.

Back in the old BBS days (anyone remember BBSes?) there was a game called Trade Wars.

On the local system that had Trade Wars, one of the players decided to name his ship "Toys For Crippled Orphans".

It was, of course, constantly and repeatedly blown up.

The Admiral is in the forward turret.

Uh, guys? Naming your ship "Toys for Orphans" is like painting a large neon colored target on your stern and calling the ship "Hit Me." Anybody who knows gamers... especially massively networked computer gamers, knows that. Heck, even with some comparatively gentle tabletop giants the scenario would turn out similarly. I'm a girl and I know that!

And don't even get me started about the tactical utility (or lack thereof) of painting physical labels on star ships. Please.

And yet hollywood continues to propogate the farcical idea that good guys always let the bad guys shoot first.

George Lucas, for one, thought it awfully "bad guyish" of Han Solo to shoot Guido first in the cantina scene, so he changed that in the re-makes.

It seems that Hollywood has this idea that good guys should always play fair and never take an advantage. never quite figured out why.

I also like the certain level of irony in the fact that you have this up today, while yesterday you were condemning the wartime actions of one General William Tecumseh Sherman.

No irony there. THe people that Sherman declared war on in large part weren't shooting at him. He was making war against non-combatants by the bushel full.

Borepatch's point was that there is no need to play fair when you're getting shot at. I highly doubt that the women and children of Roswell were shooting at Sherman. If they were, then Borepatch was wrong to condemn Sherman's actions, but they weren't. So he wasn't wrong. And there is no irony here.

Apropos of absolutely nothing, I note that the 76mm OtoMelara on the Perry class frigate, when in rest position, pointed directly through the stack at the aft Phalanx mount. Further, and again an observation out of thin air, if one were to experience a hangfire in that gun system, placing the barrel into down and locked position within a minute could prove to be a bad idea...

Back when I was running Shadowrun regularly, my players had two rules.
Rule 1: the best run is the one where we bring back all the ammo we started with.
Rule 2: if combat starts, make sure we're the ones acting in the surprise round
(This is, of course, in addition to "shoot the mage first," and, "shoot straight, conserve ammo, and never deal with a dragon.")