If you've ever had a salesman come in to sell you some high tech gear, you've been subjected to Death By Powerpoint - 300 slides that might have something interesting in it, or might not.  This style of selling is sometimes referred to as "show up and throw up".  I've been guilty of this a time or two myself.

But all of these slide decks have a common slide.  It's a diagram that shows whatever the salesman is selling at the center, and everything that you the prospective customer do circled around it.  It's essentially a world vision, one that shows how you simply can't live without whatever widget is being pitches.  I've been guilty of giving this pitch myself in the past.  Heck, I've made slides like this.

It's almost always a bad idea, and lets you know that whoever is trying to sell you is a really bad salesman.  The reason is that you the customer are at the center of your universe.  Joe the Salesman is there to make your life better, not the other way around.

Here's an example of how most of us see our own lives: 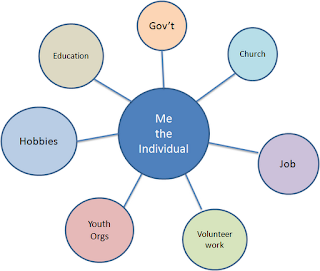 Our lives are enriched by the people and organizations that we interact with - by definition, because if we have bad experiences with one of these organizations, we won't have much to do with it in the future.  We increase our own happiness by dropping them from our lives.  This is a two way street, of course - if I make the Pop Warner football squad worse off by being an obnoxious Football Dad, they'll likely ask me to dial it down, or not to come back.  Getting shunned this way is a bad experience for me, and so either I'll cooperate or I'll drop out.

In either way, the happiness of both society and myself will increase.  This is entirely self-regulated, a miracle produced by a society occupied by Grown Ups.

Obama just lost the election with his comment about if you created a business, you didn't do that.  It is something that he simply can't recover from, because it cuts through the blah blah blah that most people rationally tune out.  It is lodging itself in people's brains, because what he basically said was this: 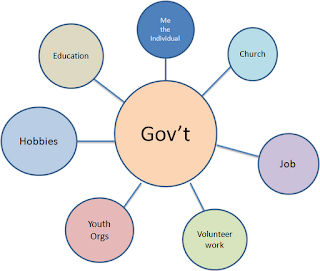 It's the Bad Salesman slide.  It's not the incompetence on display that hurts him with most of the population who are reacting very badly to this.  Rather, it's the raw arrogance on display - the effrontery that he thinks that he is at the center of our lives.

This isn't a "taken out of context" moment.  This is a "revealed world view" moment.  People are sitting up and paying attention, because they feel like they were slapped in the face.  As they pay attention, they see that the world view on display has evidence showing that this isn't a one-off, slip of the tongue:


And you the individual are being forced to buy insurance, whether you think you need it or not.

Now add in Obama's promise to fundamentally change America, and you hit critical mass.  Obama's problem is that only about 15% of Americans want his vision, and another maybe 30% or so will go along with it, more or less our of tribal inertia.  That 45% is where his polls have been stuck for months.  We'll see this shock some of those 30% out of their inertia, leaving Obama struggling to reach even 45% of the vote.

The media will continue to try to spin this, but it looks like it's going viral.  The Media's problem is that they've turned their high trust environment into a low trust one.  The ladies at Robb's scrapbooking forum trust each other a lot more than they trust the media.  This message is very damaging to Obama, and it's impossible to keep the lid on.

And Obama's campaign has never had to deal with anything like this before. Unless they're way more creative than I think they are, they're done.  Because the viral message has the ring of truth to it, and the spin feels like spin.


What divides liberals and conservatives is not roads and bridges but Julia’s world, an Obama campaign creation that may be the most self-revealing parody of liberalism ever conceived. It’s a series of cartoon illustrations in which a fictional Julia is swaddled and subsidized throughout her life by an all- giving government of bottomless pockets and “Queen for a Day” magnanimity. At every stage, the state is there to provide — preschool classes and cut-rate college loans, birth control and maternity care, business loans and retirement. The only time she’s on her own is at her grave site.

Julia’s world is totally atomized. It contains no friends, no community and, of course, no spouse. Who needs one? She’s married to the provider state.

Another way to say it is that the government is at the center of her diagram.

Stick a fork in him, he's done.
Posted by Borepatch

That diagram is full of win BP.

Honestly I hope you are right .
It would give me a bit of hope in the voters of this country again.