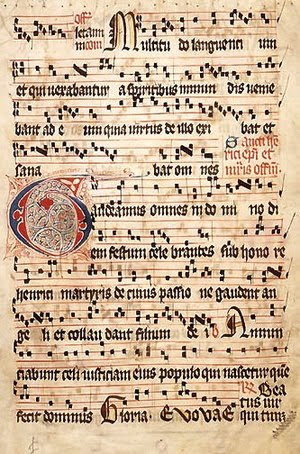 Only 115 years after the fall of the Western Roman Empire, Gregory I ascended to the throne of St. Peter.  The new Pontiff is said to have ordered that existing Church music be simplified and cataloged, making this perhaps the oldest music still performed regularly today.

But the population of the Dark Ages were woefully lacking in basic musical education, and so the chants were originally performed by soloists, rather than the choir in unison as you hear here.  Over time, the Monasteries developed the form that we recognize.

The music was a help in pre-literate days, when even many church men could neither read no write.  While the first forms of musical scoring were developed to record these songs, most singers simply memorized them.  Since the songs captured the liturgy, this was seen as part of a monk's holy education.

Music eventually evolved, starting in the High Middle Ages with harmony.  But this was the bridge from the ancient to the modern, preserved through barbarian invasion, viking raid, crusade, and the birth of fledgling European states.

Excellent- I always play a couple of Gregorian chant disks at Christmas, it creates a feeling that is contemplative and soothing.

Once you have a way of notating polyphonic music, you can transfer those mental habits to all kinds of project management — factories, military campaigns, you name it -- whenever multiple operations have to occur synchronously.

Polyphony is how Europe conquered the world -- that's my theory, and I'm sticking to it.