"You have Alexander, they — Darius! "

Our enemies are Medes and Persians, men who for centuries have lived soft and luxurious lives; we of Macedon for generations past have been trained in the hard school of danger and war. Above all, we are free men, and they are slaves. There are Greek troops, to be sure, in Persian service — but how different is their cause from ours! They will be fighting for pay — and not much of at that; we, on the contrary, shall fight for Greece, and our hearts will be in it. As for our foreign troops — Thracians, Paeonians, Illyrians, Agrianes — they are the best and stoutest soldiers in Europe, and they will find as their opponents the slackest and softest of the tribes of Asia. And what, finally, of the two men in supreme command? You have Alexander, they — Darius! 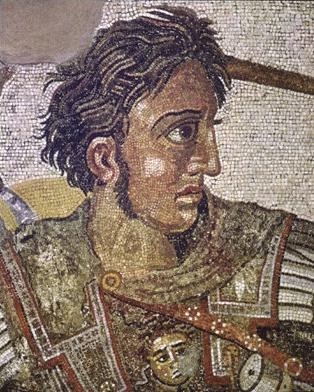 Revolutions happen suddenly.  It seems that capabilities slowly build without anyone becoming the wiser, until one day a bold leader challenges the status quo - which collapses.  Alexander the Great may have known this, or may have just been bold, but he crushed the King of Kings in three battles running, against overwhelming odds.  Three years later his host stood on the banks of the Indus river, having completely overrun the Persian Empire - up until then, the world's largest.  There, we are told, he wept that there were no more worlds to conquer.

It's not for nothing that we call him "The Great".

His speech to his troops before the second great battle, at Issus, has come down to us through the ages.  Not verbatim, as the chroniclers of the day were perhaps more Hollywood than Historian, but it seems to capture the spirit of what he might have said; for we know that Alexander was bold, but also that he read his enemies well.  He knew a secret that he shared with his troops, that numbers weren't everything. He reminded them of something that even today we often forget:

Past performance is no guarantee of future results.

There's a lot of gloom in the blogosphere lately.  People cast their glance on the size of the Great King's host that faces us, and they despair.  They see well organized and well trained shock troops in the Great King's host - well funded and organized Public Employee Unions, the rebranded but still formidable ACORN - and they quail in their hearts.  These have swept the field of battle in the past, they say.  We won't vote ourselves out of this one.

And yet, revolutions come in an instant.  One day, it's the inevitable triumph of the Great King; the next, it's Ozymandias:


And on the pedestal these words appear:
"My name is Ozymandias, king of kings:
Look on my works, ye Mighty, and despair!"
Nothing beside remains. Round the decay
Of that colossal wreck, boundless and bare
The lone and level sands stretch far away.

Even the sands forget his name.

1. The People want good government, but don't think they're getting it.  Even in Wisconsin, the Governing Party has been decisively turned out.  The size of the host matters not: They will be fighting for pay — and not much of at that.  This host will break and run at the first real challenge.

2. The People want government that will solve problems, not create them.  The elite's standing in the polls has never been lower, reflecting a complete lack of faith in the technocrats to fix the problems of the Republic.  The Democrats are clueless - the DNC Chairperson's recent comment that they "own the economy" shows that the opposing generals know not their craft, and will fight on ground of our choosing.

Two slogans, hammered repeatedly and without mercy will break the Horde.  Do you think Government works? and I'll make sure that any regulation costing jobs is eliminated is the point of attack.  The Powers That Be will be helpless.  Even with Obama's allies in the media, this simple message, repeated over and over, and released via Youtube will expose the hollowness of the current order.  It will dissolve, and be as blowing sand in the wind.

All it takes is a leader with boldness, one who will seize the moment.  One who senses that a Revolution is nigh, and who acts, rather than calculates.  Obviously, this disqualifies Mitt Romney.

At Issus, Alexander knew his foe.  Outnumbered, he knew how the battle would hinge on ground of his choosing.  Charging headlong at the Great King himself, he made the unseasoned monarch panic.   Darius threw his javelin at his attacker, but then lost his nerve and fled.  You see, he had never had to face a real opponent, pressing the attack home.  Alexander knew this, and knew that this was the key weak point, that his opponent would rout and the day would be his.

The Revolution came that day.  Alexander marched down the Mediterranean coast, taking city after city, even unto the ancient kingdom of Egypt.  There, he was proclaimed a God, the son of Amun - who after all had won overwhelming victories where the old contenders (ever the trimmers and counters) had come up short.

The Revolution awaits, pregnant with expectation.  It takes but two sayings, repeated over and over, and the battle is won.  Do you think Government works? and I'll make sure that any regulation costing jobs is eliminated.  It just waits a leader, who sees the battlefield laid out before him.  And smiles.


It is better to believe in men too rashly, and regret, than believe too meanly. Men could be more than they are, if they would try for it. He has shown them that.

He shoots, he scores!

Alexander could have crossed the Indus and gone down into India proper to take-on a number of Empires, Chandragupta Maurya just for starters, then Kalinga in Orissa with 100,000 war-elephants at their command and impassible jungles and rivers to cross, or to the Gangareddys in Bengal, or the Pandyas down in Tamilland next to the Cholas - who both had intermarried family throughout the Golden Chersonesus in Malay and the Oceanic tribes and kingdoms of the archipelago of islands...
But in all likelihood he would have gotten sucked into the jungle and lost - ultimately enmeshed in the whole psychotic Hindu super-dense gravity-thing and never gotten out, the way most other peoples who wandered in have been subsumed in the inescapable tar-pit of the Sub-Continent.

The problem I see is that we don't have an Iskander handy; most of the candidates I've seen wouldn't be fit to polish his sandals.