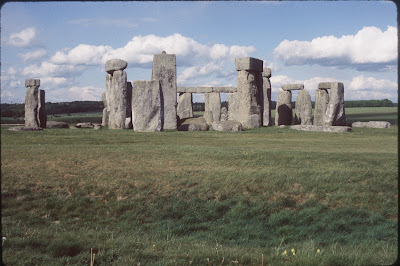 My sister-in-law took this picture, nearer the Winter Solstice than the Summer one.  It was a cold day in England, with a wind howling out of the north.  The result was a brilliant photo and a tag line just as good: It looks just like Stonehenge, but without all the people.

Today, of course, the freaks are out in force (well, were; the show's over by now).  Now you have to pay big bucks (err, pounds) to go there on the summer solstice, and brave the freaks trying to recreate a sanitized and sepia-hued imaginary Neolithic.

The times, of course, were brutal.  The stones were all brought to the site and assembled by hand, using stone tools.  Whatever you can say about that society, "freedom loving" is not part of it.  It must have been rigidly hierarchic, as were all of the very ancient agricultural societies.

For a small class of people to be able to devote the time needed to accurately predict the solstice, and then design the Henge to capture that meant that most of the society must have lived by the sweat of their brow.  The surplus was skimmed to support ancient Neolithic SWPL vanity projects.

Now it's High Speed Rail, but the game still involves skimming the surplus from the productive to fund the schemes and dreams of an elite parasite class.  And so here's a monument to the actual workers, who produce the surplus that's traditionally skimmed:

We hold these truths to be self-evident, that all men are created equal, that they are endowed by their Creator with certain unalienable Rights, that among these are Life, Liberty and the pursuit of Happiness. — That to secure these rights, Governments are instituted among Men, deriving their just powers from the consent of the governed, — That whenever any Form of Government becomes destructive of these ends, it is the Right of the People to alter or to abolish it, and to institute new Government, laying its foundation on such principles and organizing its powers in such form, as to them shall seem most likely to effect their Safety and Happiness.

May it not be that the days are shortening from this point onward, in the ways that count the most.
Posted by Borepatch

"the game still involves skimming the surplus from the productive to fund the schemes and dreams of an elite parasite class."

And historically when that happens we fight a war of independence.

I hadn't made the connection but it makes perfect sense. May more people see the Truth.