When You Say Nothing At All 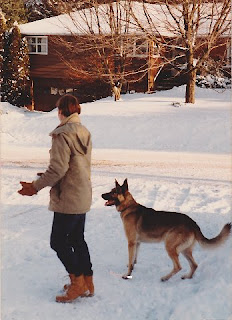 Jack loved snowballs.  More accurately, Jack loved chasing snowballs.  Winters in Maine gave him a lot of opportunity for this most favorite of all pastimes.

Jack was the reason that I never really lived alone.  He was the dog where lightning was caught in the bottle, where dog and master were so in tune with each other as to almost merge into a single spirit.  And so, a couple years later when I graduated and got my job in Maryland at Three Letter Agency, I wasn't living alone in a one bedroom apartment.

I was living with Jack.

I wrote about him before, and you can RTWT if you want, but this bit says what needs saying:


Up in Maine, there was a forest trail not 100 yards from my door. Here in the People's Republic of Massachusetts, folks would drive for an hour to take that walk. It was almost always just Jack and me. Big pine trees. Otters. Old stone fences from when people actually tried to grow crops there.

It wasn't as good in Maryland, there just isn't the same kind of space. But once we bought our own house, there was the neighborhood school which had great fields. Jack had a real nose for softballs, and since people would lose them in the trees all the time, we never lacked for something to chase.

I never really lived alone.  Growing up, I lived an entirely ordinary life at home with Mom and Dad and my brothers.  At State U, I was in a dorm, and while you might not have a room mate, you have 200 other students in the building that you hang out with.

In Maryland, I had Jack, and then a family of my own: 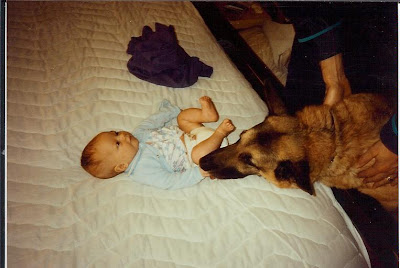 That's the newborn #1 Son, getting introduced to Jack.  He doesn't remember Jack at all, but I'll never forget my four footed soul mate.  Byron's epitaph to his own beloved Bo's'n is cliche, but somehow doesn't quite pay Jack his due:


Near this Spot
are deposited the Remains of one
who possessed Beauty without Vanity,
Strength without Insolence,
Courage without Ferocity,
and all the virtues of Man without his Vices.

And so, I find that in a half century of life, I've never lived alone.  Until now.

It's quite odd.  I find, somewhat to my surprise, that I am channeling my inner Neat Freak.  Back home at Camp Borepatch, you're living in the eye of the tornado what with teenagers, pets, and the whole gang.  Here, it's just me.

I think that keeping things always tidy is a defense mechanism of sorts, a statement that I'm keeping tight control.  It makes me wonder what might happen if I didn't.  Probably nothing.

But it's very odd to not have the opportunity to speak a single word from when you leave work until when you return in the morning.  I think on Christopher Hitchen's musings on losing his voice, and think just how much of our humanity is contained there in the vocal chords.  And I wonder about what happens when you have no reason to exercise them.

You see, with Jack, I'd have someone to talk to.

Thanks to everyone who left comments to yesterday's post.  As with the long, sad journey I took with Dad, it helps to write about it.  To say something about it.  Thanks for listening.


After silence, that which comes closest to expressing the inexpressible is music.

I can live alone - and have, although it's been quite awhile. It's just that I prefer having one other person around. Fortunately for me, she feels the same way.

Hang in there is right... Dogs truly ARE man's best friend... And sadly we out live them...

I have lived alone now for almost five years. I understand what you speak of. It is time for me to bring another four legged friend into my life.

I must say however that you DO learn much about yourself when there is no one giving feedback. I feel I have learned more about myself in this period in my life than any other.

I have a female friend that coyly commented several weeks ago that she knows why I am not in a relationship. I need to ask her what she knows.

Keads, I'm not sure just how much I want to peer into that particular mirror, especially at my age.

My only thought on your Lady Friend is that she, too, may be a mirror. If you want to look into it. Interesting times, my friend.

Oh, I will ask her. As far as your age, I say no. Self discovery and knowing who you are without being all that everyone else expects of you to me has been worth it.

I am approaching a birthday this month. Almost a half century on this Earth. I hope I have not offended you my friend. I have no children, but I came into two step children, granddaughters, etc. some time ago.

Some of that "controlled chaos" mindset remains. I am now back to as you say a neat and orderly mindset. I hope to find a happy balance between the two.

I DO miss a partner. One may come, but as many have said "you are not really looking".