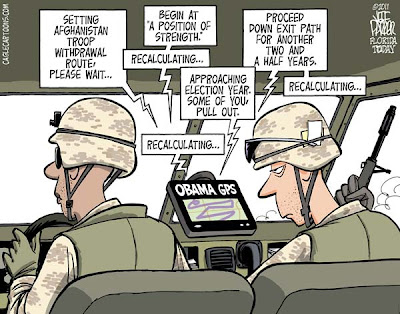 Image from Theo.  And I don't even think it's the wrong decision to bring them home.  Me, I might even do it, but if I did I'd do it now, and do it quick.  Win it, or come home now.  I wouldn't leave them there to fight if they weren't going to be allowed to win.  Because it's not free.

This President ran for election on the platform of bringing them home.  Now he finds, like Augustine, that "not just yet" is best.  It's the most cynical move I've ever seen my government make during wartime, and I remember Vietnam.  It makes me physically sick.
Posted by Borepatch

So wrong... Playing politics with the Military because he can... I'd vote for Bugs Bunny for Pres before I'd vote for a liberal like him.

We should bring all the Troops Home
and when we have left Nuke it and the north of Pakistan untill there is nothing left the whole shit heap
is not worth spilling Troops blood for.

"Win it, or come home now." Exactly. Quit using soldier's lives to play political games with. Let them fight or don't put them in danger.

Tricky Dick's looking not so bad anymore, eh what?
Or Jimmy either...
Q

Anonymous, he's overruled the generals, who asked for more troops to win it. Maybe that was the wrong call, but if you're not in it to win, then you should get out.

He's gone "Vietnam" on us. Any day now, I expect to hear them announce the "Afghanistanization" of the war.

I stand by my statement that this is the most cynical thing I've ever seen my government do, and I'm north of 50.