On receiving this information, Lucius Apronius, successor to Camillus, alarmed more by the dishonour of his own men than by the glory of the enemy, ventured on a deed quite exceptional at that time and derived from old tradition. He flogged to death every tenth man drawn by lot from the disgraced cohort. 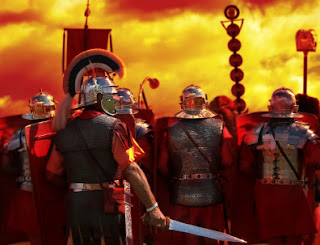 Decimation had fallen our of favor long before Tacitus' day.  In the dawn of the Roman Republic, order was strictly maintained.  The reason that Rome triumphed over first the Etruscians, and then the Latins, then Greeks, Epirans, and Carthaginians in turn was because they maintained their discipline.  Or else.

Decimation was reserved for the most egregious examples where discipline broke down: whole units fleeing the field of battle, say, or mutiny.  It was intended to make an example that people would not soon forget.

Lots were drawn, and every tenth man put to death.  In the Ancient Days of the Republic, the surviving nine had to do the dirty work.  The message was unmistakable: a repeat will not be tolerated.

In all of Roman history, there seems to have been only a single case where a repeat was necessary.  The chroniclers tell us that Legio I Maximiana, the "Theban" Legion had converted en masse to Christianity.  In 286 AD, they were ordered to sacrifice to the current Emperor, Diocletian.  They are said to have refused, to a man.  The Legion was decimated, and the survivors ordered to make the expected sacrifice.  Again, they refused.  The entire Legion was put to death.

Diocletian knew who was to call the shots.

We find ourselves in a time where an Imperial Federal (and State, and Local) bureaucracy is increasingly calling the shots for us, the citizenry.  Whether Department of Education SWAT teams, or small farmers being threatened with $4M fines for the unlicensed raising of rabbits, or an EPA determined to implement the Cap and Trade regulations that Congress is unwilling to vote in, or a local SWAT team in Pima County, AZ that was pleased to shoot first and ask questions of its Iraq War veteran target later.

The Organs of the State do not self-correct.  The Iron Law of Bureaucracy says that mistakes will be swept under the rug to protect the agency, all rules will be interpreted expansively in order to maximize the Agency's scope and budget, and that any challenge to the Agency will furiously be met with the full force of the Law.  It is, in fact, trench warfare, protecting the scope of power of the Agency.

It doesn't matter which agency it is.

Of course, all of this increased scope comes from us, we the People.  The Fourth Amendment seems to essentially have been repealed, as has serious portions of the Fifth, the Second (in some locales), and even the First.  Government power is transcendent.

Of course, it must stop.  Not only can we no longer afford it, but it has become a cancer eating away at the fabric of our Republic.  Each incremental transfer of power, extra-constitutionally, from the People to the State, diminishes us.  The Agencies will resist all reform to their dieing breath.  Scaling back education budgets will see teachers (but not administrators) laid off; cutting town budgets will see libraries closed (but not the elimination of the town motor pool); public safety cuts will result in fewer beat cope (but not fewer SWAT teams).  So what is the Republic to do?

Decimation.  Not in the "kill them all" sense, but in the "fire 10% of them" sense.  This will have several salutatory effects:

2. It will focus the minds of the remaining 90%.  We'll need this, because institutional rot goes deep - the people who claw their way to the top of the Merrovingian civil service are masters at bureaucratic knife fighting.  We'll have to get rid of a bunch of people, both good and bad, to get the attention of the rest.

3. Only then, can we tell the bureaucracy to make additional cuts, but cut fat, and not actual services.  Personally, I expect more than one round of decimation will be needed before the Organs of the State start to Get It.

And what also needs decimation is the layers and layers of cruft that's accumulated in the government regulation manuals.  Scale this back by 20%, and then another 10%.  Give the agencies to understand that advancement lies through cutting red tape, not piling more on.  If the agencies won't Get It, then another round of decimation is called for.

Alas, this dream is unlikely to come to pass.  The
Contemptable
Democratic Party is fully invested in increasing numbers of unionized bureaucrats.  The
Stupid
Republican Party mouthes platitudes about the "Reagan Revolution" and "shrinking government" while looking for every way to grow their pet functions.

And so, I have but one idea.  It, too, involves decimation.

The Republican Party in particular has mutinied.  They have fled the field of battle that they so claim to cherish - Reagan's Revolution.  The solution is a public institutional culling of the ranks.  Vote 'em out, even the "good" ones, to let them know that this simply will no longer be tolerated.  And that if the rest won't do their job, we'll find someone who will.


So beneficial was this rigour that a detachment of veterans, numbering not more than five hundred, routed those same troops of Tacfarinas on their attacking a fortress named Thala.

Great post, and I'd fire the 'stupervisors'... They are the hidebound, set in their ways, no changes here problem.

I think the dream is unlikely to come to pass partially because you have misidentified Diocletian. He still knows who calls the shots. That is why he is getting the 4th, the 5th, and the 6th. And most people are - as should be obvious - content to make the sacrifice; after the 10th, it got easier for us all. Like the Romans, we don't particularly care about or believe in the state gods (unlike the Legio I), but we'll sacrifice whatever Caesar wants, so long as he leaves us well enough alone. If the Praetorians in TSA can survive, so can Diocletian. When it comes time to sacrifice the 2nd, a legion or two may go, but if it comes to that, odds are that Diocletian will still be there; or do you think decimated, and consequently weaker elected officials will be able to overcome an entrenched bureaucracy?

The legion is apocryphal, but if you decide, you may yet ask St. George for some reinforcements, after all, his side won in the end. Otherwise, "haue imperator, morituri te salutant!"

Decimation is when I collect 96 million 16 bit samples in a second, and the DSP guys throw out the majority of them before most of the real filtering and other processing starts. So why do I take all of those millions of samples if they're just going to decimate them so deeply?

Bit of trivia on the Theban Legion: their commander was Saint Maurice. In the church's telling, the legion was ordered to harass local Christians, in what is now Switzerland. The legion, led by Maurice, refused what they viewed as an immoral order.

Maurice is the patron saint of the Infantry.