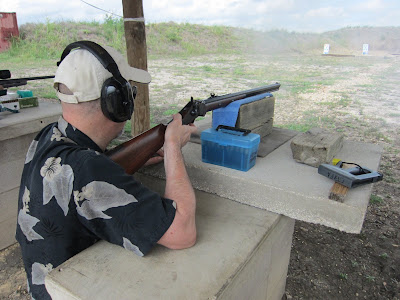 The 1870s saw a massive change in firearms technology, with the widespread introduction of the brass cartridge case.  One of the companies riding that wave was the Sharps Rifle Manufacturing Company, which in 1872 introduced the .50-90 cartridge, and this magnificent rifle to go with it*. 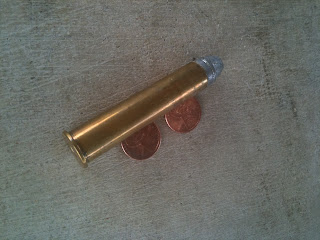 The cartridge was fifty caliber (one half of an inch in diameter), and when propelled by its 90 grains (5 g or so) of black powder, the soft lead bullet had enormous energy which would take down even massive beasts like the American Bison.

Unsurprisingly, it became very popular with Buffalo hunters.  So much so that it was the rifle used by Billy Dixon at the Battle of Adobe Walls, where he took down a Comanche attacker at the distance of a mile.

Long time readers, knowing my very modest marksmanship skills will know that this rifle is much, much more accurate than I ever will be.

The rifle is a single shot action (i.e. no magazine), where the lever that doubles as the trigger guard opens the breach by dropping a massive block.  This "falling block" design made the rifle extremely strong, and able to stand up to the pressures generated by the massive cartridge. 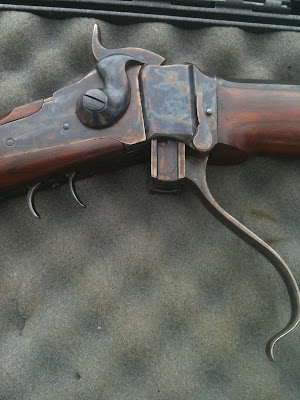 This is a reproduction that Ye Old Furt graciously let me shoot.  The case hardening was so sweet that I was afraid I was going to drool on it.  The trigger is pretty interesting.  You can use the trigger normally, in which case, you simply squeeze the front trigger like you would on any rifle.  Alternatively, you can use the second trigger to "set" the first, making it a hair trigger.  The hunters would do this when they were shooting at very long distance, and had to wait for that instant when their target was in their sights.

Given the, err, exuberant recoil this rifle packs, I didn't quite dare.  Plus, I was shooting at a measly 100 yards, which was no test of the rifle at all.  Me, that's a different story, although aiming at center mass delivered a hole in center mass.  Rather gratifying, actually. 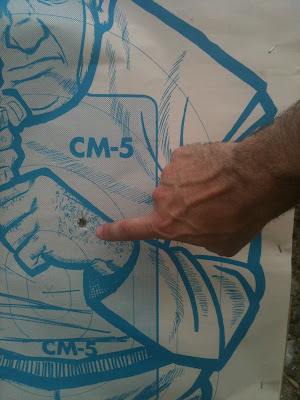 The ammunition is spendy, I'd imagine.  The cartridge is obsolete, and so you either need to reload or buy from someone who does.  It's also dirty - it's black powder, after all.  The barrel didn't seem to get fouled with the dozen or so rounds we jointly launched down range, but this isn't a clean-your-gun-once-a-year deal like a Glock.

What would hold me back (other than the obvious downside of the expense) is knowing that I cannot come close to shooting this rifle as well as it deserves.  This looks like something that gets comfortable at 500 yards or more, sort of like a Porche that never feels like it's quite alive at 55 MPH.

But there was a puddle of History on the ground, where it had been dripping off this rifle.  And there's no denying that shooting it drew a crowd, in a way that no AR ever will.  Thanks to Ye Old Furt for sharing a bit of history with me.

* Trivia: the last rifle introduced by the Sharps Rifle Manufacturing Company was designed by Hugo Borchardt, who went on to design the first auto-loading pistol.
Posted by Borepatch

Although the .50-90 may be obsolete and spendy, the .45-70 is much less so, being still in production, and is likewise one of the old buffalo hunter cartridges. If you're willing to go with .45-70 instead of .50-90, you can acquire something for a fairly reasonable price.

VERY nice BP, and YOF is a good guy! Glad y'all had a good time!

Just realize you don't shoot them off-hand unless you're built like Andre the Giant.

Aw hellz yeah! That's one of my dream guns right there: a Shiloh Arms Model 1873 Sharps Long Range Express in .45-70.

I'll third the .45-70 suggestion. Never shot one before (never shot anything before, actually), but the round's a heck of a lot more common and less wallet-draining than the .50-90. And I'll wager it'd be easier on your shoulder too.

Several years ago I got one in 45-120. Don't shoot it anymore with full-house loads due to arthritis in my neck and shoulder probably caused in a great degree by too much big recoil over the past 50+ years. So I load the case 1/2 with powder and 1/2 with Cream of Wheat. Still great fun!

Next blogshoot I'm bringing a video camera. The high tech Barrett in the post above gives the 50 cal Mom a good hard push. The Sharps 50 kicked BP like a pissed off mule.

Well, that's when you learn to drive the Porsche 100 mph faster — or, in this case, shoot that rifle 400 yards further. I'd go for the gun, though. Less chance of, ah, having to be picked up off the road with a stick and a spoon. ;)

I love all my black powder firearms. The Sharps is awesome. Great post!

"Given the, err, exuberant recoil this rifle packs, I didn't quite dare."

The set trigger is SCARY light. Never shot one with the set trigger, but in dry firing I have yet to apply enough pressure so that I know I'm on the trigger.

Thanks so much for the post. I love old black powder firearms like that. Firing one makes me feel like I'm connected to the past, somehow. Like this is how shooting is really supposed to be.