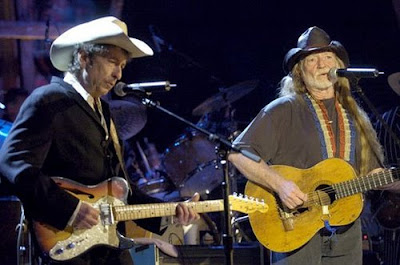 Everybody sings with Willie.

You see, Willie doesn't do "market segmentation." He doesn't build walls between different types of music.

He busts them down.

In his long career, he's sung with a lot of folks. You can lose hours on Youtube watching Willie and someoneorother: Willie and Norah Jones, Willie and Ray Charles, Willie and Julio Inglesias, Willie and Sinead O'Connor, ZZ Top, or Snoop Dogg.

Record executives love to segment the market. It makes it easier to plan, you see. Instead of Rock 'n Roll, we'll have Hard Rock, and Classic Rock, and Oldies. But then we can break down Hard Rock to Heavy Metal, and then Thrash/Screamo/whatever-the-young-folk-listen-to-today.

Willie didn't have any use for that sort of market manipulation, or for the record execs who do it. Of course, he is Country. There are the country legends he sang with. He formed The Highwaymen with Johnny Cash, Kris Kristofferson, and Waylon Jennings. He (with Waylon Jennings) created Outlaw Country - named not for being one step ahead of The Law, but one step ahead of the Nashville establishment. After all, he wrote Patsy Cline's "Crazy".

But lack of segmentation never hurt him. Ten Grammys. Eighteen Platinum albums (and who knows how many others). All in between trouble with the IRS - no, not because of Weed, but because he had a lousy accountant. Last I heard, he sued 'em (the accountant, not the IRS), and he won. Then landed film roles in Wag The Dog and Austin Powers: The Spy Who Shagged Me, and 29 other film or TV roles. Oh, behave.

But he won't. He's busy busting down walls. Here's Willie with another wall buster, Bob Dylan.

The poets tell how Pancho fell
Lefty's livin' in a cheap hotel
The desert's quiet and Cleveland's cold
So the story ends we're told
Pancho needs your prayers it's true,
But save a few for Lefty too
He just did what he had to do
Now he's growing old

And here's the original music video with Merle Haggard, from their duet album of the same name.

I heard one of the ones he and Norah Jones did on sirius the other day, and I hope I hear more of it.

Come to think of it, I'm off to the big city tomorrow, maybe I'll see if I can find a copy of that album.

Willie is a great talent, and impossible to classify.

I would suggest that if he spent less time smoking dope he might have been able to keep a better eye on his accountants, but that would be catty.

One of my Willie Nelson CD's has a permanent spot in the CD changer.