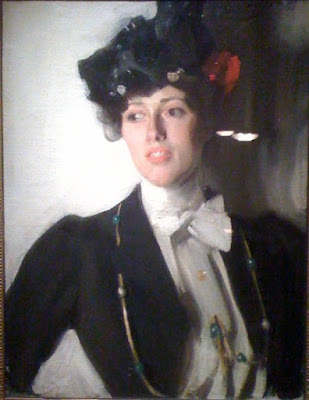 The reason that history repeats itself is that nobody listens the first time.

It's surprising just how, well, un- educated today's intellectuals are. It's a failure of imagination, really - a failure to recognize that previous generations were just as clever, or beautiful, as ours.

Miss Martha Dana was a hottie. The future Mrs. William R. Mercer was painted by Anders Zorn in 1899, when she was 27. Understandably attached to the painting, she bequeathed it to the Boston Museum of Fine Arts, where I snapped it's picture with my iPhone.

People don't think about this, that previous generations weren't different from us at all. Sure, we have Quantum Theory and iPhones, but is it safe to assume - as most of today's intellectuals routinely do - that we think differently? That we see the world in deeper shades of color than they did?

More importantly, is it safe to assume that we're making new mistakes, rather than old mistakes?

La Gabelle was the most hated tax in France - indeed, it was so hated that it was one of the reasons that King Louis was not just shuffled aside into a Constitutional Monarchy role, but had some Quality Time with Madame Guillotine. You could call the tax a mistake.

So what was it about la Gabelle that made it so despised? After all, it was just a tax (in this case, a tax on salt). You don't like the tax, don't buy so much salt. Ah, there's the rub.

You had to buy the salt. By law, everyone ten years old or older had to buy salt, at a price set by the Crown. More infuriating, different parts of the realm paid different tax - favored regions got a break. Naturally, this led to a thriving smuggling trade, with increasingly draconian penalties as time went on. In the end, the cash was too important to the financially-strapped Ancien Regime to allow for reform, and the whole system collapsed.

Today's intellectuals (on the left side of the aisle) either don't know this, or have forgotten this. Most likely, they would think it's irrelevant, since they're Ever So Much More Clever Than Previous Generations.

And so the Senate just passed a Gabelle.

Soon, you will be forced by law to buy something (health insurance). Because people will naturally want to buy less of it, you'll have to buy as much as the government says, at a price set by them. Not everyone will have to pay the same - favorites of the Regime (the unions, in this case, but expect this list to be ever expanding) will get special deals. Regional differences will exist, but won't effect the price due to government prohibitions (ban on interstate insurance sales). As the New Deal and Great Society programs hit the budget in full fiscal force, the cash will be too important to the government to allow for needed reforms.

The analogy is (as all analogies are) imprecise, but what is fascinating is just how similar Obamacare is to la Gabelle. The Intellectuals don't get this.

They also don't get just how unpopular this will be. They're patting themselves on the back, and congratulating themselves on being on The Right Side Of History. That lack of intellectual awareness is also fascinating.

Things are fixin' to get, err, hot around here, toute suite.
Posted by Borepatch

I'd second that and lets not forget the crushing tax burden & bloated imperial bureaucracy of late antiquity. It all ended in tears...

It's the same old mistakes over and over again and hubris that blinds intellectuals from recognizing anything other than their own self-conceit of greatness.
The thing is, they're really not intellectuals as much as a class of people who claim that mantle to cover-up their multitudinous flaws.

When the equivalent of Madame Guillotine is resurrected (such as which the Jihadis are attempting) they will have the same surprised last-look on their faces.