#1 Son has his driver's license. 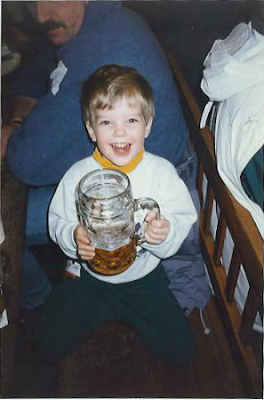 No, he's not a beer fan, and it's not 1996 any more. I have to say that's he's a particularly careful driver. It's a no-brainer that he's a better driver than 90% of the folks in the Boston area. Not that that says much - #2 Son is a better shot than 95% of the kids in his Middle School.

It will be interesting to be able to send #1 Son out to the store for milk, rather than having to get my shoes on and go out in the cold.

Congrats for the lad, & please disregard my prior "advice".
...

While sitting here with the CPU peaking, I think I noticed the problem.
Your entire blog (well, alot) loads on one page.

If you'd put a page break in every so often, I wouldn't have to avoid this place so much.

There are still denizens of the past lurking on dialup- please help us Obi-Wan B'p'tch...

In the early days of this blog, I looked into how to add one of those spiffy "Click 'More' to read the whole post" thingies. But I was a n00b, and by blog-fu was not up to the challenge.

I shall endeavor to sort this out, to allow faster loading. Unfortunately, by blog lists and assorted stuff on the right hand column is accumulating, to rather excessive length.

I added a Read more click link to my blog - it was not easy! I just wish I could get that Top Posts thing working on mine!!

Before my Daughter first took to the roads on her own, I gave her the "head on a swivel" talk. Just like motorcycle riders, even if a young driver does everything correctly - they can still get creamed by the douche on the cellphone not paying attention.

She still had her truck totaled one night when she got plowed into from behind on the highway by someone who fell asleep at the wheel - she walked away without a scratch.

So does #1 Son get his own wheels, or does he have to borrow the Lasalle when he wants to cruise chicks?

Congrats to the newest Borepatch on the road!

Well, see, the silver lining in THAT cloud is, when you send No. 1 Son out for milk, you can get the lovely and vivacious Mrs. Borepatch to help you feel young again for a bit. IYKWIMAITYD. ;-)

Pistolero, you are the wind beneath my wings ...