In the Army, there is teeth, and there is tail. The teeth are the front line fighting soldiers who go after the enemy day in and day out. The tail are the rear echelon people who keep the teeth supplied with fuel, ammo, and what the teeth need to beat the enemy. America does logistics better than anybody, but the result is that there may be ten people in the tail for every warrior in the teeth.

This book is from one of the warriors in the teeth.

J. Richard Watkins is a Massachusetts man who joined up because it was the expected thing to do. His family had served their country, his friends all served, and when he turned 18, he did, too. He found himself in Vietnam in the very point of the tooth, as a radioman assigned to search and destroy patrols. This is his story of his eighty-odd missions.

I figured that if I got the radio off my back and laid it on the ground a few feet to my left, they would concentrate their fire on it. I was hoping the dumb bastards would still figure I had it on my back and I think they did just that, considering the amount of bullets that continued to hit the ground around that radio.

The radio was now off my back, but I could still reach over and talk through the phone to call in the artillery support we were starting to need so desperately. "Two Zero, this is Two Zero Echo Bravo, fire mission. Over," I yelled frantically into the phone.

The most interesting parts of his book are not the combat scenes. While intense, they're short (perhaps the way they were in the field). There's quite a bit about the tension between the teeth and tail units:

I would be one of ten guys to get a medal this day, for the combat that we had been involved in the previous six weeks or so. As I looked down the line at my fellow soldiers, it came over me that the way we looked was the way we always looked. We always seemed to be coming in from a mission or going out on one, so for us to stand at attention with a clean new uniform on would have been hypocritical. The way everyone was dressed was a much clearer representation of who we really were and we were very proud of who we were. Let the "Base Camp Warriors" get their "Bullshit" medals all dressed up with their boots shined. I was proud to represent the "Wolfhounds" by looking the exact same way I did each and every day in the jungled and rice paddies of South Vietnam.

I had the pleasure of meeting Sgt Watkins at the Fitchburg Gun Show, where I bought his book. I believe that what he has done - writing his memoirs of those years, in his own voice - is terribly important for future generations. If we've learned anything from the "Greatest Generation" who stormed the beaches at Omaha and Iwo, it' 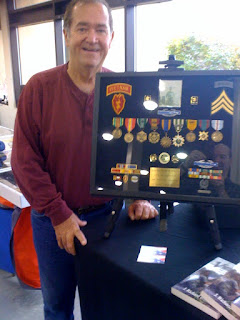 s that too many held off talking about it. Many are now gone, and their stories will never be told.

Sgt. Watkins, thank you for your service to your country, not once but twice: once in the jungles of Cu Chi, and again telling your story.

Very, very highly recommended. This book isn't polished like the ghost written memoirs, but it's the real deal. If you're looking for a holiday gift for someone who digs military history - especially from the Grunt's perspective - you can find it online here.
Posted by Borepatch

I was teeth too. Our motto was
"It's better to be shot at and missed, than to be shit at and hit."

The U.S. refused to help Ho Chi Minh win independence from the French. After that, Ho appealed to the Soviet Union. At that point, the U.S. suddenly was able to muster military aid to fight Ho.
Viet Nam was a war that should never have been.