Well look who came to the party ... 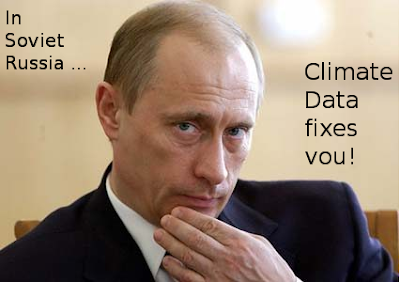 You know that your data's questionable when the Russians say that the numbers have been fudged:

Today another example of CRU having their foot on the scale, Russian papers are reporting that the Russian surface station data was sorted by CRU to use the highest warming stations only.

Climategate has already affected Russia. On Tuesday, the Moscow-based Institute of Economic Analysis (IEA) issued a report claiming that the Hadley Center for Climate Change based at the headquarters of the British Meteorological Office in Exeter (Devon, England) had probably tampered with Russian-climate data.

Over 40% of Russian territory was not included in global-temperature calculations for some other reasons, rather than the lack of meteorological stations and observations.

The data of stations located in areas not listed in the Hadley Climate Research Unit Temperature UK (HadCRUT) survey often does not show any substantial warming in the late 20th century and the early 21st century.

In Soviet Union, the future is always known. It is past that always changes. Looks like the gang at the Hadley CRU have taken that to Version 2.0.

Stick a fork in Global Warming, folks. The data is a total mess, people all over are taking a hard look at the numbers, and any reputable scientist is going to be extra careful before publishing anything.

My take is that this will reset the science to pre-1998 (before Michael Mann). There's good science to be done here, but that can't happen until the politics is drained from the system. Opening up all the data is the fastest way to get that done, and that looks like it's happening at warp speed.
Posted by Borepatch

Evidently, *this* was the surprise announcement we were teased about a couple weeks back.

I view anything from any Russki source with extreme suspicion. Putin is still KGB to the core and will cheerfully lie like a rug if he thinks he can gain thereby.

Wolfwalker, you're right - Putin is KGB through and through.

it doesn't look like this group is Russia.Gov (admittedly, those threads are pretty tricky to unravel).

They seem to have their data available.

Again, as I've been saying for some time, I don't care about motivations - I care about data.

The Russians just kicked the CRU in the gonads. What we don't know is why, but I'd expect that there will be an advantage to Russian industry to discrediting AGW.