Global Warming has been missing for 19 years

Whichever value one adopts, it is becoming harder and harder to maintain that we face a “climate crisis” caused by our past and present sins of emission.

Taking the least-squares linear-regression trend on Remote Sensing Systems’ satellite-based monthly global mean lower-troposphere temperature dataset, there has been no global warming – none at all – for at least 215 months.

I have great confidence in the satellite record because (a) it is truly global in scope, (b) it is entirely automated, (c) the sensors are well calibrated, and (d) it is not adjusted, gridded, and otherwise manipulated.  The data as recorded are the data that are reported.  All of this is in great contrast to the surface record.

So a full half of the historical record of the most reliable global temperature data set shows zero warming, despite enormous increases in atmospheric carbon dioxide levels.  None of the climate models have predicted this, which is a layman's way of saying that the scientific predictions from the models has been falsified. 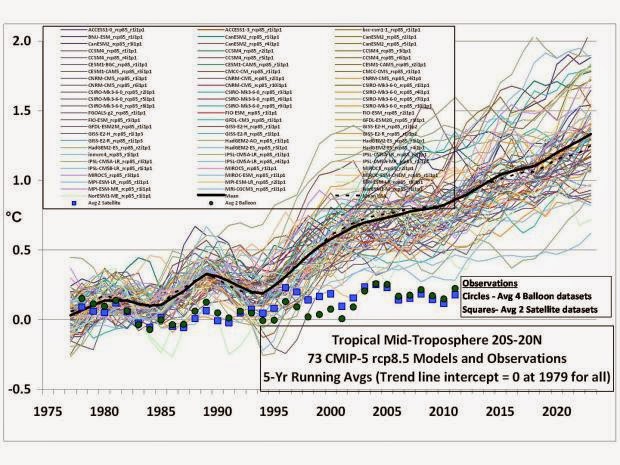 And falsification is at the core of the Scientific Method.  Bottom line: the models are busted.
Posted by Borepatch

"The data as recorded are the data that are reported. All of this is in great contrast to the surface record."

And the balloon measurements show strong correlation to the satellite record.

They are MODELS, inherently incorrect... sigh...