You will not read these double plus ungood scriblings of later day Goldsteins, Citizen.  These links are merely posted here to inform you that they are not to be linked.

What If ObamaCare, Too Big To Fail Banks and the State Are All the Wrong Sized Unit?

This thought-crime posting offers the following thought-crime graphic describing the growth of the State. You will not read this. 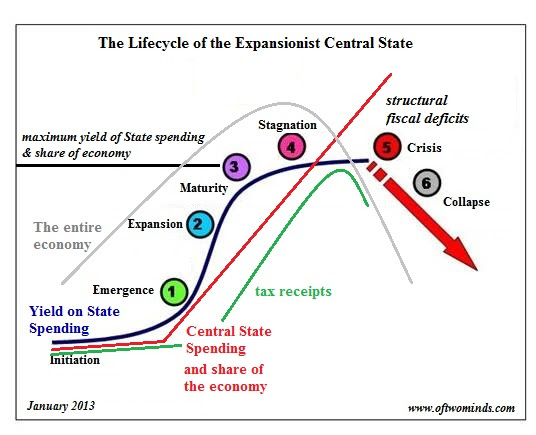 This Enemy Of The People suggests that Rousseau's "Popular Will" is not the underpinning of glorious revolution.  Or that it doesn't work and leads to slaughter of innocents.  As if any are truly innocent. Da, tovarich?  At least he shows that Locke fellow to be a criminal, as well as the entire American "Revolution".  Link is from Foseti so you know not to click, right?  RIGHT?

How the Revolutionary Cadres are trained, for mediocrity and obsequiousness.  But this is secret, Comrade.  Those who blab outside the Inner Party will be liquidated.  Also via counter-revolutionary running dog Foseti.

Of course no list of Thought Crime is complete without Uncle Jay, but at least he can drink vodka, nyet?

Go, and do not read.  Instead look at glorious People's motorcycles, from People's Automotiv Collectiv #17:

So much better than nekulturny Chinese People's Revolutionary Motorcycle. Bah.  What does cruiser motorcycle know about snow in Great Patriotic War?
Posted by Borepatch

"Zen and The Art of Motorcycle Maintenance"?