By "Small Town Bumpkins", I'm not referring to small towns or the people who live there (both of which I generally find quite agreeable).  Rather, I'm talking about the stereotype so commonly found in literature - close minded, ignorant, uninterested in anything beyond the close and comfortable horizon.  American literature certainly from about 1870 through 1960 is filled with this trope.

There's nothing uniquely American about this, and in many places it's been institutionalized.  Scandanavia has what in Danish is termed Janteloven - the Law of Jante.  The idea was described in a novel in the 1930s, but basically is a set of rules imposed by the citizens on the citizenry.  It's used to maintain social cohesion, unity, and (most importantly) existing power structures.  Some examples of the ten Laws include:
Probably most important was this: You're not to laugh at us.  The novel described the soul-crushing conformity imposed in the town of Jante.  This resonated so strongly that the idea of Janteloven has entered the Scandanavian mindset (or perhaps more accurately it gave a name to what was already there).  But it's here, too, on these shores.

Interestingly, you really don't find it much in small towns.  Instead, you find it in the Faculty Lounge, in the coastal SWPL Intellectual Class, in the New York Times and CBS News.  This is unspoken but brutally enforced.  Need an example?  OK ...

Palin violated all of the ten laws, particularly the rule against laughing at them.  I remember blogging her speech to the Republican Convention in 2008, and that's what stood out most strongly:

"A mayor is like a community organizer - with responsibilities."

"Send the Styrofoam Greek columns back to the studio set."

"What's he going to do - after turning back the waters and healing the planet?"

Oh, and she mocked the media, too. Looked like she enjoyed it.

Boy, howdy, this is turning into an interesting race.

And the Intellectual "Elite" went into full meltdown mode.  It was full bore Class Warfare, with the "Elites" uniting to punish a violation of the Janteloven.  And then it continued a couple years later:

And once again, the "Intellectual Elite" lost its collective mind in a spittle-flecked rage. 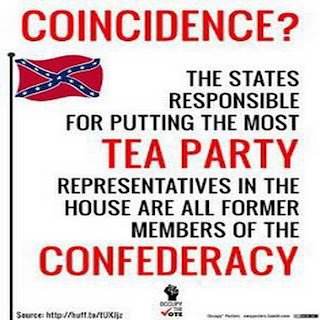 Because the Tea Party is all about repealing the 13th Amendment, or something.  Remember, the people foaming at the mouth at the impudence of the peasants willfully violating the Janteloven are firmly convinced that they're smarter than you, better educated than you, more traveled than you, and nicer than you.  And so, there are some things you need to keep in mind, wingnut:
And you must never, ever laugh at them.  Look at the kids in the Tea Party picture, at their signs: Stay Out Of My Piggy Bank.  They're laughing at the "Intellectual Elite".

And the "Elite" acts like you'd expect from a closed-minded small town rube who's climbed to the top of the local power structure.  Well, the literary stereotype, since most small town folks I've met have a lot more common sense than this.  The "Elites" - the New York Times Editorial Board - remind one of the conversation you had with the President of your High School Debate Team back at the 20th reunion.  Remember how you went away shaking your head that he still though that made him smarter than everyone?  That's the NYT Editorial Board on Palin or the Tea Party.

Small minded, insular, untraveled (at least to flyover country, where their mental horizons would get expanded).  Bumpkins.  Angry bumpkins.

Thanks for the new vocabulary word. I plan to use it and "schadenfreude" in a sentence today.

You didn't use "oikophobia." How could you omit such a delightful and appropriate word? :)

Fix the typo in the header, and we'll think about this as the new Bluesmobile...

Lissa, the older I get the more I appreciate simple vocabulary. Winston Churchill's "fight them on the beaches" speech is my ideal. Good old Anglo-Saxon roots.

Jay, I cleverly left a typo in it to see who was paying attention. You get full marks.

Great. Now its a toss-up whether I write-in Ted Cruz or Sarah Palin on my ballot come next Prez election. Excellent post, though!

I've never met anyone more provincial than a New Yorker. They think they know everything about the world, yet the have absolutely no understanding of the way reality works.