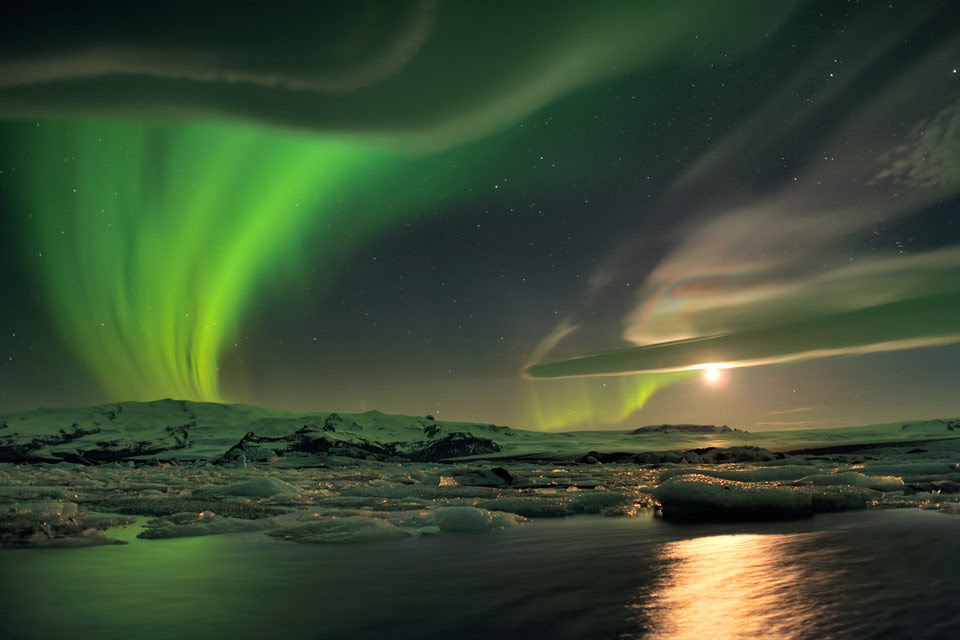 Over the Iceland glacier.  From the Astronomy Picture Of The Day.
Posted by Borepatch

I"ve made it my life's mission to one day travel to Alaska to watch the Aurora Borealis.

ccbpc - If you do, and you are lucky enough to see them, you won't be disappointed.

I've met city folk who don't even know that you can see the milky way on a dark night. Think of how amazing that is, when you can see it clear as day, sprinkled with too many stars to count in a lifetime.

Now imagine that its moving and undulating, in various breathtaking colors.

A trip booked with only viewing the lights in mind would not be wasted, my friend.

I just thought of something else that i forgot to mention:

You don't need to travel to Alaska to see them.

One of the three times I saw them, I was at about 48 degrees north latitude (in the State of Washington, North Cascades), on top of a mountain at about 8,000 feet above sea level, and saw them clear as day.

I was almost moved to tears. Dude, you want to feel small and insignificant, but at the same time infinitely blessed, let the northern lights sneak up on you some night when you're all alone with your thoughts and ghosts, and you aren't expecting them.

i sat there, on the back of that horse, for the better part of a half an hour, watching them dance in the night sky. It was frigid that night; still as death, but so stiflingly cold and insulated in snow everywhere that it was entirely silent. i think even my horse was holding his breath, because I didn't feel him stir beneath me one bit.

He was watching them, too.

It was one of the most unbelievable experiences of my lifetime.

I understand aurora tours are a thing you can do. There are tour companies that will take you to Alaska or northern Canada, put you up in a hotel, and shuttle you out under the stars to see the aurora for yourself.

I've seen it a couple times from Ohio and upper New York. Not as bright as what's in the photo but still awe-inspiring.

They are REALLY impressive from Thule...

Goober, if I hadn't wanted to trek Northwest to view this spectacle before, your comments would have convinced me that this is a must do before I die. Thank you for your eloquence.

The further north, the better your chances. They can be seen at high elevation in lower lattitudes but it's rare.

Alaska is your best bet.