It's amazing how long things can last, and how quickly they can then collapse.  Like a great Oak Tree, dominating the landscape; a big storm comes by and suddenly it's kindling, revealed to all as hollowed out at the core. 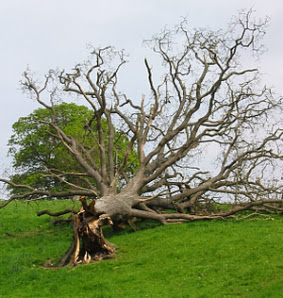 What had seemed the day before to be solid is now a display of inner rot.  We see this all the time in the political arena: the ancient Bourbon Kings of the Ancien Régime had Versailles as their crib, for crying out loud.  In 1789 they gave the tip o' the crown to a decidedly Middle Class series of reforms; two years later the Royal Blood ran red in the ironically named Place de la Concorde.

I myself recall being on vacation, sitting in a sunlit piazza in Florence and reading the International Herald Tribune.  The Warsaw Pact was letting their people leave, rather than machine gunning them at the border.  It's over, I realized, and two short months later the Berlin Wall fell to sledge hammers from both sides.  Gone as if it had never been.

Mussolini was probably the most influential world leader in the 1920s, although the Professoriat doesn't want to tell you that today.  He was founder of the fascist political philosophy, a collectivist movement taking its name from the ancient Roman fasces, a bundle of sticks used by Roman officials as signs of office.  While each stick in the fasces is easily broken, the collection of sticks makes the fasces an intimidating weapon.

So just how influential was Mussolini?  I don't see too many of these now, but when I was a kid, these dimes were common:

That's a fasces on the back side of American legal tender (please don't anyone tell me that Franklin Roosevelt wasn't a fascist).  Mussolini was also author of the "Third Way" between Capitalism and Communism so beloved of modern Euro politicians who have absolutely no clue where the term came from.

But two weeks after the Allies invaded Sicily in 1943, his own Fascist Council voted him out and he was arrested.  Gone in the blink of an eye, and while Adolf Hitler sent a daring team of commandos to rescue him, he was done and ended swinging from a lamppost.

We see this over and over and over again.  The "best and brightest" who are at best "adequately predictable" see nothing but continued strength in the status quo, right before the bottom drops out.  The CIA thought that the Soviet Union was the world's third largest economy in 1989.  Oops.

Seemingly at the height of their power, and then gone.  And so to our own day.

The Democrats find themselves in the position of a Ceaușescu in 1988, or Louis XVI in 1790, or Mussolini in 1942.  They have promised great things to the masses, but have been unable to deliver.  The specific charges laid before the Democratic Party are thus: 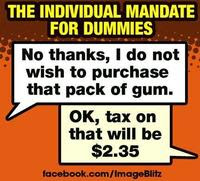 Obama has hollowed out his constituency, chasing a philosophical will o' the wisp.  Even worse, he seems to be at his core a very arrogant yet insecure man; he has not staffed his Administration with a roster of strong lieutenants. Everything is blowing up, and he needs talent to help him - the talent he did not surround himself with. The Tumbrels of 2014 are beginning to rumble through the streets, and nobody in the Administration even knows the scope of their problem.  But they will.

Collapses come quickly because once the illusion of invincibility vanishes, it vanished suddenly.  One day the entire country is intimidated by the strongman Ceaușescu; two weeks later he's swinging at the end of a rope.  The masses who were afraid to oppose him lost their fear, and the apparatchiks who see a career path with the Great Man suddenly changed their minds.

That Tipping Point is happening here, and it's happening right now.  It's actually pretty stunning to watch (as indeed are all of these moments) because there's this sense that he can't really be this clueless.  Oh yes he can. 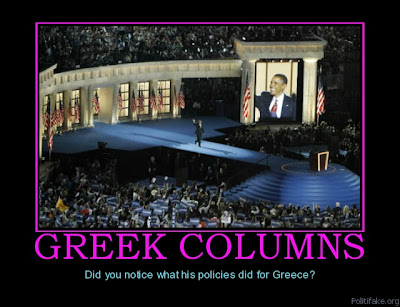 The Democratic Party's core constituencies are sure noticing now.  At the time, I blogged his convention appearance.  I pointed out the proper name for pillars used this way as faux props.  It's not a Temple, it's a Folly.

To ask the questions is to see the future.  It is to see the outcome of the 2014 elections.  Where that leads us nobody can foresee, but the political landscape will no more resemble today's than the political landscape in Eastern Europe resembles that of 1988.  A generational shift is upon us.  It is a primal, elemental power that can be channelled - for good or ill - by a person of energy and vision.  We do not know who that might be, but we know for a fact that it is not Barrack Obama.
Posted by Borepatch

It is sweet to watch. And, I see DiFi is picking out her deck chair, which will turn out to be right in the middle of the Republican Promenade Deck....couldn't happen to a nicer bunch of folks.

I think you're right, BP. I'm not sure exactly where this will end up, but I think we're seeing a definite sea change. Lots of political blood to be shed here.

There is a line in your last paragraph that keeps me awake at night:

It is a primal, elemental power that can be channelled - for good or ill - by a person of energy and vision.

I fear a person of energy and vision taking hold of the reins of power. The power that is there firhgtens me- the Patriot Act, VIPR teams, a militarized police force, the NSA, tracking people by cell phone MAC, illegal searches, and all of the other powers that have been added to the tool box over the past 15 years or so.

The likelihood of that power being abused is high. A person of energy and vision is not going to use that power to scale back government, as any politician that threatens to cut off the gravy train that is SNAP, TANF, Social Security, and other giveaways will be run out on a rail.

No, the politician that grasps this brass ring is going to set up a police state that is more powerful and all encompassing than anything seen in history.

The real takeaway is that something less than 13 percent of those willing to stand still long enough to be asked know the real score.

As Divemedic said, now is the time to be on the lookout for the Man on Horseback. We had enough sense to dodge Dugout Doug in the last century; one hopes we can do it again.

Divemedic, you are not alone in your sentiments about this. Scares the bejesus out of me, too.

Regards the poll question "which party can best solve the health care problem" it is all in the wording.

If the options were R, D, or neither I would bet that R and D would each poll about 20% and neither get the rest.

As someone who knows the system very well I did not think it would be possible to take our dysfunctional, horrid healthcare system and actually make it worse.

A stunning legacy. It will be the analog of a re-design and re-launch of the Yugo....only now it can only go in reverse. Slowly. And with smoke pouring out of it.

"But now it's made out of papier-mache, like the sustainably-sourced cars of Europe!" :-)

Doesn't matter he who controls the Diebold voting machines controls the election, why do you think they won last time after a 15% trail in the polls behind Romney.
As log as they are smart and keep winning in the low 50% range they can be in power almost forever, they have purged the military of anyone capable of taking a stand to enforce the constitution.