In Soviet Russia, future climate is known. Is past climate that always changes.

The CIA considered the Soviet Union an economic power when it was actually an economic wreck.


The most spectacular Intelligence failure of the Cold War was the failure to recognize the impending collapse of the Warsaw Pact in 1989, and the Soviet Union in 1991.  The CIA certainly reported on plenty of problems as the 1980s wound on towards International Socialism's rendezvous with destiny - as highlighted in this self-serving and mostly missing-the-point analysis from the CIA on its own reporting.  This analysis is entirely unsatisfactory, because it completely fails to account for how the USSR was ranked third or forth on the list of the largest World economies.

That wasn't just wrong, it was spectacularly wrong, and had enormous policy implications all throughout the 1980s.  All Western policy makers who used the CIA's analysis as the basis for policy found that they were equally (and equally spectacularly) wrong.

So how did the CIA get into this position?  By being very good at collecting data, but not so good at collecting the right data.  As near as we can tell from unclassified reports, the Agency had a decent grasp of the summary economic data as presented to the Central Committee.  The problem was that the data was bogus.

The Soviet economy was regimented, a rigid command and control system where those at the top set the direction and goals, and those in the factories tried to execute to the 5 year plan.  Factory managers who didn't execute to plan had troubles, and so there was a built in incentive to cheat.  Corners were cut, output was trimmed to where the plan was met with sub-standard, shoddy goods.  Or the numbers were simply made up, and the fraudulent data was sent up the chain.

Further massaging was done in mid level bureaus, because nobody wanted to be the guy who brought the bad news.  Essentially, the data deteriorated its way up the chain to the top, and nobody was very interested in double checking to see if the data as reported matched what had originally been collected.  You see, it wasn't in anyone's interest to do so, and it was very much in everyone's interest not to do so.

We hear that the science of global warming is settled, that we have incontrovertible proof that mankind is catastrophically ruining the climate.  We read this in the newspaper every day, and hear it daily on the nightly news.  We have Top Men working the problem, and the guys in the White Lab Coats have made their pronouncement.

OK, then.  But I've been wondering for a while if anyone has taken that data that has popped out the top of the Climate Model food chain and compared it to the original data that was fed into the system at the lowest level.  After all, if the since is settled, those two data sets - the ones at the beginning and the end - should agree very closely, right?  I mean, this was the mistake that the CIA made, and we don't want to do that.  Right?  So is anyone making this sort of comparison?

Yes, but it's not somebody from the scientific "consensus" establishment.  Interestingly, the data have been changed.

All of the major climate data bases - the University of East Anglia's Climate Research Unit (HADCRUT), NASA's Goddard Institute for Space Studies (GISTemp), and the National Oceanographic and Atmospheric Administration's National Climactic Data Center (NCDC) - all take the bulk of their data from a single original source: the Global Historical Climate Network.  This was the earliest compilation of temperature records from all over the world, dating back more than a century for most of the world and several centuries for Europe in particular.  Most of the later data sets can be matched to GHCN by things like Station Identifiers.  Probably there is 70% overlap from GHCN data, possibly much more.

Something interesting happened to GHCN: it has been changed not just once, but twice.  The latest and greatest is GHCN version 3, and it's important to understand that the data is different between the versions.  It's not just that stations have been added or removed, but it appears that data for a particular station at a particular date and time has been changed.

Let me just emphasize that point.  Sometime in the last decade or so, someone picked some older temperatures (say, for Alice Springs, Australia on January 3, 1919) and changed the data.

If you now have visions of a faceless apparatchik in GOSPLAN modifying production figures before giving a report to the CC/CPSU, then you 're not the only one.  Perhaps this is harmless, although I know of literally no other field in science where it is considered acceptable to change data after it was recorded.  But hey, that's just me, and you know what a beastly Denier I am.

So the question we should ask - to be scientific - is how does GHCN v1 differ from GHCN v3?  If both largely agree and report warming over the 20th Century, then perhaps the science really is settled.  After all, it's a truism that "the scientist proposes and Nature disposes."  The data don't lie.  So how close are the data sets?


What is found is a degree of “shift” of the input data of roughly the same order of scale as the reputed Global Warming.

The inevitable conclusion of this is that we are depending on the various climate codes to be nearly 100% perfect in removing this warming shift, of being insensitive to it, for the assertions about global warming to be real.

Simple changes of composition of the GHCN data set between Version 1 and Version 3 can account for the observed “Global Warming”; and the assertion that those biases in the adjustments are valid, or are adequately removed via the various codes are just that: Assertions.

Emphasis is mine.  Let me say this plainly: ALL of the 20th Century's observed warming is accounted for in changes to the GHCN database between version 1 and version 3.  All of it.  And remember, all the other databases get most of their data from GHCNv3.  If someone hadn't changed the database, we wouldn't be talking about this whole Thermageddon thing.

This is very important stuff, and is hard to excerpt the linked analysis.  If you RTWT, you will understand more about climate science than 99% of anyone you are likely to ever meet.

I've been suspicious about this for quite some time, but I've now seen enough that makes me question our ability to even understand what's going on.  Rather than the science being settled, the science has been fixed (not as in corrected, but as the fix being in).  Even the Russians say that the data are fishy.


My opinion now is that we simply cannot know whether the climate is warming or cooling, because the data has been so manipulated as to be no longer reliable.
And so back to the sudden collapse of the Communist bloc.  The data had been fixed, to the point where even the finest analysts in the Free World couldn't see what was coming.  In defense of the CIA, it's unlikely that the Central Committee saw it coming, either.  It's a sobering realization that GOSPLAN did not fix itself, and that the scientific establishment is unlikely to, either. 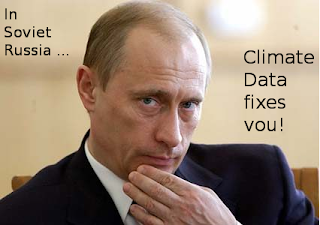 Quit picking on the CIA. There were apparently a good many American academics of the Soviet system who also did not predict, in spectacular fashion, the Soviet collapse. Imagine that. Academics getting it wrong. Why, that's almost unheard of!

Andy, the academics' record on the Soviet Union's impending demise was wretched - especially for the opinion of the "experts" (Political Scientists):

That said, the last two words in the CIA's name are "Intelligence" and "Agency".

Concur- And the real climatologists I talk to say much the same thing...

And the other thing is that the record is only ~100 years old. Seems old to us, but in comparison to the age of the earth, it's less than a blink, and a very teeny, tiny data set.

ProudHilbilly, this is precisely why my BS meter went off, several years ago, I was decently versed by paleo reconstructions covering the Holocene, and this didn't seem out of whack.

But even by their own definition - that the last 100 years is unusual, it only appears so after the data are massaged.

And while the Soviet data is not your main emphasis, but illustrative of your point on GHCN, the same thing is going on with data in China today. Don't believe everything you hear about them being an economic juggernaut.

There are serious problems over there caused by the same forces that caused the problem in the politburo.

At what point in the data massaging process can one say enough has been changed enough that there's no reliable way to determine what it actually was in the original, and the only thing left to do is throw it all out and start over?

And, has the climate data debacle reached that point?

Alien, mostly the raw data is available (thank goodness). What's new is that people are comparing data pre- and post-adjustment, and finding the adjusted data wanting.