People should have known in 1914 when the guns of August began firing that this was going to be a serious, bloody affair.  The seven years between 1898 and 1905 had lessons aplenty to suggest that the butcher's bill would be higher than anyone was expecting. A series of conflicts where a major power confronted a minor one highlighted the new technologies that would play such a major role in the World War.

The Spanish American War was the American Republic - then probably the world's biggest economy - matched against the moribund Spanish Monarchy.  To nobody's surprise, the Americans won handily.  What most people didn't notice was that the poorly trained Spanish soldiers put their new Mauser rifles to very effective use against the Americans.  The U.S. Army recognized that the Mauser was so superior to their Krag rifle that they licensed the Mauser design for production in the M1903 Springfield.

This lesson was given again in the following year in South Africa.  The Second Boer War pitted the British Army against a rag tag militia - a militia that shot them to pieces with the same Mausers that the Spanish had used so effectively against the Americans.  December 1899 saw 14,000 British tommies break and run after being shattered by withering rifle fire from entrenched Boer militia.  The battle of Magersfontein was in many ways a foreshadowing of what the Tommies would do fourteen years later to the Kaiser's divisions at Mons. 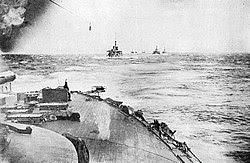 The third lesson came in 1905 when the world was shocked to see the Czar's Baltic Seas Fleet was annihilated by the Imperial Japanese Navy.  This was the first time that Europeans had been bested by what was then called "lesser races" perhaps since the Mongol invasion of the 13th Century.  Europeans were used to dominating native populations around the globe, and the fact that one of these populations could master the new military technologies and leverage that into such a lopsided victory was a wake up call.

All of these should have been wake up calls.  In each case, what should have been an easy win over weak opponents came either at ruinous cost, or was a humiliating defeat.  The technologies were easily usable even by these opponents.  Planners should have extrapolated what would be the result when the Mausers were wielded not by poorly fed Boer farmers, but by the Imperial German Army.

And yet Europe was eager for War in 1914.  People hadn't been paying attention.  They would soon. 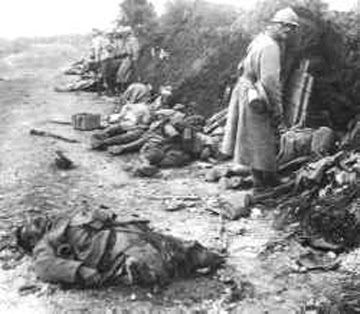 The European's misjudgements started even earlier when they paid more attention to Robert E Lee, still a vastly overrated general, than U. S. Grant.

Seriously. The guy didn't have a real middle name. The S is completely made up. All things being equal, Lee over Grant any day.

OH! for the LOVE OF GOD! WAR is about KILLING PEOPLE , the dead do not give a good G-D about glory OR generals. Mostly they'r just kids who lay on the ground screaming for momy. The ones who live just want to go HOME and forget this Si*& ever happened. war sucks.

Robert E. Lee was a great general as long as he had room to maneuver and troops to maneuver with. When he didn't have those things, he was considerably less effective.

Borepatch: "The U.S. Army recognized that the Mauser was so superior to their Krag rifle that they licensed the Mauser design for production in the M1903 Springfield."

Well, there's a leetle bit more to the story than that. The US Army captured some Spanish Mauser M93 rifles during the Spanish-American War, studied them, and began making a modified copy at the Springfield Armory. The Mauser brothers got somewhat irked at this and sued the US Army for patent violation. They won, and the Army was forced to pay royalties and license fees to the Mausers.

Yes, being outnumbered and out supplied does tend to put limits on what can be done. Of course Lee used movement to his advantage as static slugfests were obviously not workable.

Anonymous, you're right - war stinks. That's why troops have the right to expect the Generals to understand what the technology can do. If you have to fight, get it over as quickly and cleanly as possible (which won't be much of either, but the Great War was simply criminal).

Nial Fergusson's book The War of The World, though horific, is a great look at the politics leading upto and through WWII. He has also written a book about the origins of WWI "The Pity of War: Explaining World War One" which I have yet to read, but promises to be good.

Borepatch but they did learn, they used the Lee Enfield as the standard rifle in WW1, both sides fought to a stalemate on the Western front thanks to being equally armed. Only with the invention of the Tank and moving artillery barrages did they crack the problem.
Same goes for the Boer war they had early losses learned from them and came up with tactics to defeat the kommando unit's. Barbed wire got it's first use during this war.

I first got interested in guns by being into military history, and encountering some of the many good stories buried deep in the history of military firearms. For example, did you know that the US Army once seriously considered using the 9mm Luger Pistole Parabellum P08 as its standard-issue sidearm?

Up through at least the middle of the 20th century, most of the military leadership of the "leading" nations were very severely tradition-bound. This led to trench warfare (reminiscent of the days when armies fought battles by lining up in neat, orderly rows across a battlefield and yelled insults while the generals parlayed in the middle, then both sides rushed out for a grand melee), the aeroplane used as a scout vehicle (read up on Billy Mitchel's battle with the Army in the post-WW1 years...the man was way ahead of his time!), early tanks being used as backup for infantry, and only sent into the line in ones and twos. There are exceptions, of course, but for the most part, the commanding generals were unable or ill-equipped to handle the sudden leaps forward that technology was making.

Now THAT's interesting. Having lived with both an '03 and a Mauser, I know that they're quite similar. But I did NOT know that the one was based on the other.

Learn something new every day.

Whenever people bitch and complain about the appeasement policies prior to WWII and talk about how cowardly they were, I always remark that they are not taking the actions of the European leaders in context. They had only 20 years prior witnessed the wasteful, useless death of an entire generation of European men, and the destruction of the entire world economy because 7 men (the leaders of the belligerent states) decided to get into a pissing match. Any one of those 7 men could have ensured peace if he'd just backed down. They all chose war, and the death and maiming of too many good men to count.

Chamberlain wasn't willing to commit an entire generation of men to their grisly deaths simply due to bloviation and nationalism. he was willing to consider the lesser of two evils to be the preferrable path.

History has shown that he was wrong. The context of the time shows that he made a perfectly valid and reasonable decision, that most people probably supported at the time, because of the context.

They only later found out that Chamberlain was wrong to do what he did, but I still don't blame him for making that choice. Context is everything.