The view from my office window

I was in a meeting today, and glanced out of my office window.  I'm afraid that I was a little unprofessional - only a little: I just fell silent, rather than popping off a Holy crap!.  I saw one of these fly by: 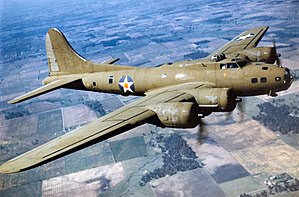 It's not every day that you see a B-17 flying a thousand feet above the Chattahoochee.  Or pretty much any day.

I think that it was the Memphis Belle, which flew in for an air show last weekend.  It would have been cool to go, but #2 Son and I were at Appleseed.

It was funny, when it flew out of view and I focused back on the meeting, all eyes were on me (ah, the disadvantage of videoconferencing - you can tell who's paying attention and who's not).  But the meeting went into a ten minute detour while everyone talked about air shows, and cool old war birds, and who'd been up for a ride in one and what it cost (around $400 or so).

Sweet meeting, at least until we went back to going over schedules an feature sets ...
Posted by Borepatch

Nice relief for a moment though, and no hippies complaining about the "cost of war" when the *price* is beyond their comprehension...

Aluminum Overcast is back in service at Centennial Colorado. It turns out the control surfaces, ailerons, rudder, and elevators are fabric covered, and do not go well with large hail. Guess what the Experimental Aircraft Association works on in their fabric covering workshops?

Pretty bird! And a nice break at least for a few minutes!!!

Dude....a warbird of any flavor is ALWAYS worthy of a respectful silence (followed by a moment taken to wipe away drool and/or pick jaw up off floor). Awesome!!

I haven't seen a WWII plane in the air since ... well, it's been a very long time. Thank you for getting a snapshot of it & sharing with us.

Rev. Paul, I swiped that pic off of the 'net. The plane was gone in just a few seconds: 5, maybe 10. Not enough time even to get my cell phone.

A few of those seconds were just wasted as my brain spun through a "Hey! that looks just like a B-17!" routine.

Eyeing a passing B17 is reason enough to pause any meeting. Very cool.

I was one of the last lucky individuals to go for a flight on the Liberty Belle a couple of weeks before she went down in a cornfield due to an engine fire, crashed, and was a total loss due to the fire. It was an awesome experience and one I will never forget.