When Alaric heard that the people were trained and ready to fight, he said that thicker grass was easier to mow than thinner and laughed broadly at the ambassadors, but when they turned to discuss peace he used expressions excessive even for an arrogant barbarian: he declared that he would not give up the siege unless he got all the gold and silver in the city, as well as all movable property and the barbarian slaves. When one of the ambassadors asked what he would leave for the citizens if he took these, he replied: 'Their lives.'

The Eternal City had not been the Imperial Capital for some time, as Emperors had felt the need to be near the frontier, and so the city itself was strategically useless.  But spiritually, it was the heart of the Empire, and so it was a shock when the Visigoths sacked the city.  After all, no conquering foe had marched in the city's streets for eight centuries.  Now, they ransacked the Mausoleum of Caesar Augustus himself, scattering the divine ashes under foot.

It seemed like the world had ended.  In a sense, it had.

The Progressive vision has been ascendent for a century, which is a long, long time in modern political terms. This year will be for Progressives what 410 was for Romans: not the end, but the point after which it will be impossible to foresee not just the victory of their vision, but even its survival.  Even in true blue Wisconsin, a rage-fueled recall election has resulted in a vote confirming the utter lack of public support for public employee unions.  Five months from now will see the humiliating defeat of Obama, and the Republican capture of the Senate.  As with the Roman Ambassadors of old, they too will wonder what they were left with.

But perhaps most traumatic of all, they will know that their day is past.  The Western Empire staggered on for another sixty years.  Rome wasn't built in a day and neither did it turn to ruins in a day.  So with the Progressive movement, which will stagger on for some unknown time, gut shot by a public that is decisively rejecting it.

What will come next is a mystery, and likely will not be to my liking either.  The Roman Imperial administrators became administrators in the new barbarian kingdoms.  Latin remained the language of the known world, and Roman Law was still enforced.  But everyone knew that everything had changed.  Soon, it was gone, leaving nothing but colossal ruins.


A long period of distress and anarchy, in which empire, and arts, and riches, had migrated from the banks of the Tiber, was incapable of restoring or adorning the city; and, as all that is human must retrograde if it do not advance, every successive age must have hastened the ruin of the works of antiquity.

- Edward Gibbon, Decline and Fall of the Roman Empire 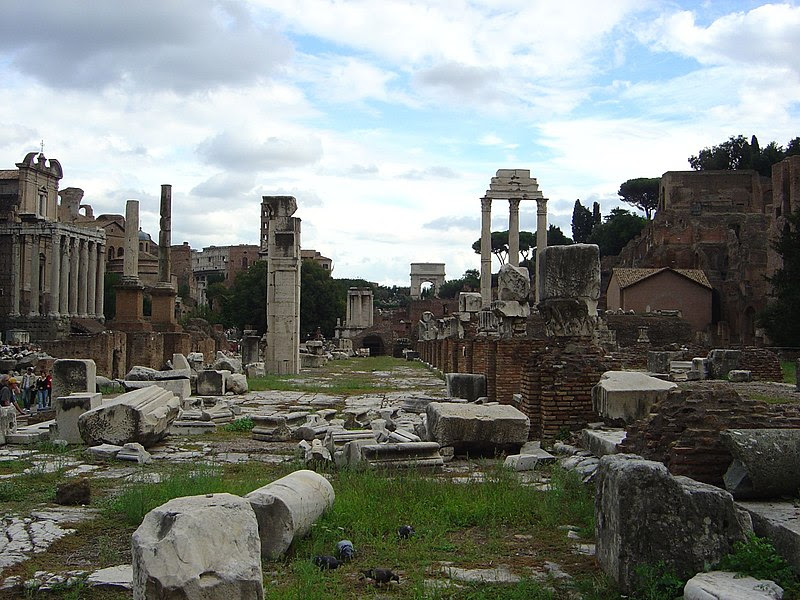 What is best?  To crush your enemy's ideology, to see it driven from the airwaves, and to hear the lamentation of his Professors.
Posted by Borepatch

And the lamentations of his Unionist bodyguards!

I recall similar exhortations from the left about the right four years ago.

Most of the so-called Republicans in Congress are Progressives, too, but even The Stupid Party will have the point driven home by the voters, if they don't change their tunes.

And like you, I don't really know what will come next either. Perhaps a return to Constitutionalism ... for a time. I wonder whether we'll be able to keep the momentum rolling this time.

Orphan, the wheels are coming off the Progressive bus everywhere you look: Europe, California, Wisconsin. As a matter of fact, the biggest Progressive defeats are in the most Progressive areas.

This is by no means a one off, and it's driven by the fiscal bankruptcy of the vision itself.

Whether anyone would prefer things to be different or not, the numbers don't lie.

"This year will be for Progressives what 410 was for Romans: not the end, but the point after which it will be impossible to foresee not just the victory of their vision, but even its survival."
With any luck. If the evil party minions were not stupid as well, there might be hope for something fresh to come out of the ashes with a rebirth of freedom based on an understanding of the principles of the founding fathers. If the writings of some disgruntled unemployed German from 160 years ago can spread around the world, why can't the writings of a bunch of rich men who threw it all over for liberty do the same?

Republicans hate unions because unions support Democrats, not because of principle.
Both unions and corporations are the same: a group of individuals who combine their resources to achieve goals that are nearly impossible for the individuals. In other words, the result is that the whole has greater political power than the sum of its parts.
This is easily seen in the AARP, defense contractors, and other corporations that sell to government, as well as the public unions. The AARP does exactly the same thing as public unions: demands that the legislators grant their members some political favor at the expense of the rest of the public, in exchange for campaign funding and assistance in keeping their elected positions.

You say this better than anyone else out there. Is that a glow I see in the distance? Fire or light, I suppose we'll see.