How many computer programs do you use?  If you're like most people, you have a few that you use all the time (Microsoft Office stuff, web browser, email), and a large number of once-in-a-while ones (look at all the clutter in the "All Programs" menu).  It's actually more complicated than that, because the number of executable files that those programs contain probably numbers in the thousands, likely in the tens of thousands.

From a security perspective, it's the file that's important.  A security technology that goes back to the 1990s was the personal firewall, which watched which executable was trying to connect to the network - after all, the interesting malware was the malware that "phoned home".  Blocking all but the few known programs that wanted to connect to the network was a decent step forward for security.

But it doesn't always work right.  I saw this, on my corporate laptop: 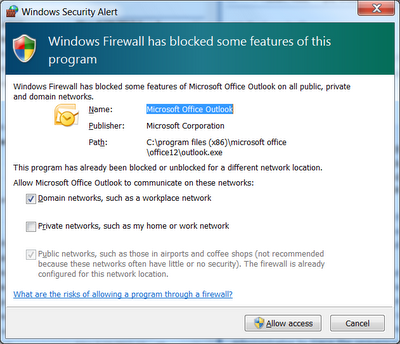 That's Microsoft's personal firewall asking me if it's OK if Microsoft's Outlook email connects to the network. Dude, it's email.  Yeah, it needs the 'net.  And it's your email app.

I say this not to mock Microsoft who, I must say, has been doing a very good job with security for a number of years now.  Rather, it's to point out the mind numbing complexity of a system as simple as personal firewalling, which is about as mature a technology as you're going to find in security these days.  Even something that's been ticked off the "To Do" list for a dozen years goes Tango Uniform sometimes.

The assumption that you know how the system is working is a seductive one.  I say this from personal experience - I'm one of those guys in security who's brought groundbreaking technology (VPN, vulnerability scanning, and Intrusion Detection) to the market several times in my career.  I (somewhat immodestly) point this out not to brag, but to say that we screwed it up every single time.

Sure, each was an advance, but we didn't understand the way computers work. Any of the times.  I've worked with scary smart people - the kind of folks who leave smart prints on the carpet when they walk by, and we never understood things as well as we thought.  And it was just a few thousand executable files.

Imagine the national economy: thousands of markets, millions of companies, hundreds of millions of consumers.  Look at the stock exchanges and the billions of transactions every day.  Look at all the new products and brands introduced every year, and how most of them fail miserably.

And yet we keep getting snotty nosed Ivy League liberal arts majors telling us that they know just how to run things.  All they need are the reins of power - to be used lightly, of course - and all will be made to work Properly.

The intellectual arrogance of my younger self and my compatriots was breathtaking, but was nothing like this.  I look at the people who say that the Stimulus was "too small to really increase aggregate demand", and I think about Microsoft's personal firewall not understanding that the new Outlook executable just downloaded in the latest Patch Tuesday is, well, Microsoft Outlook.

No wonder that central economic planning is a miserable failure everywhere it's tried.  The Economy isn't just bigger than central planning's practitioners imagine, it's bigger than they can possibly imagine.

I'm a bit more humble now, after my past successes. That's an odd statement, but it's absolutely true.  I've learned from past efforts that tried to get things right, and only partially succeeded.  Strange how we don't get a similar attitude from our Intellectual Betters who do not lack for examples of planning failures.

Maybe that's why I don't think that they're very smart.  A bit harsh to say, but true.  Just because you found something doesn't mean it's yours.
Posted by Borepatch

that looks like a really wierd edge case you've run into. the firewall detected something amiss, so it prompted you.

I do find it weird that public is set and locked down, and private is unset and not locked down. I'd expect the reverse!

And oh by the way, economic planners sure as heck can't anticipate them all.

Borepatch - that there is genuine wisdom.

Wisdom consists in knowing that you don't know it all, despite previous successes, and despite being in group (heck, being one of the ones) that leaves "smart prints on the rugs". And especially despite your Ivy League diploma on the wall.

Ran into the same thing back in my semiconductor mfg days; the number of variables goes exponential pretty darn quickly, and one either learns to identify and (try to) control the biggest problem causers and scale out as many of the rest as possible, or one gets the rubber cubicle.

It was fun, though, when we took a torpedo amidships and presented the options chart to The Suits who figured they should know what the problem was, and have them ID the issue. You know the flow chart - the one that starts out with large boldface type "get very clean sand" and eleventy pages later ends with "seal tested module with chips inside" in 1 point type and in between looks like the spaghetti pot at a church dinner.

Borepatch, are you one of those ungovernable people Obama keeps telling me about?

Graybeard, I have contempt for all of our "Intellectual Betters" who twittered at Rumsfled's "unknown unknowns" speech. But thank you.

Anon, my nightmare is to serve on a ship captained by one of those idiots. They don't know when to shut up and listen to the Master Chief.

Andy, tragically, I fear that this is the case. I guess that will be moot in a few months since he will be gone, and the wind will fill his footprints with sand.

To put seriously scary best and brightest in perspective, we recently had our building renovated and they went with a modern design especially with new carpeting laid down in squares. Our resident geniuses got very upset trying to figure out what the pattern was. It was broken to them gently that it was truly random and there was no pattern. They had spent a week trying to figure it out and I'm convinced some of them had flowcharts to solve it.

Nice post. The arrogance of youth, thinking that problems have simple solution, or indeed, solutions. Which calls immediately to mind the quote often attributed to Churchill (though he apparently never actually said it):

Those who still think they can solve the problems of society through increased government intervention are still young and naive, regardless of their actual age. The best government can do is to regulate as lightly as possible and let society take its course.