It was trente glorieuses:


Many years ago, long before the birth of the web, there was a time when France was the happening-est place in the digital universe.

What the TGV was to train travel, the Pompidou Centre to art, and the Ariane project to rocketry, in the early 1980s the Minitel was to the world of telecommunications.

And so on Saturday, exactly 30 years after it was launched, the Minitel is bowing out. After that, the little beige box will answer no more. 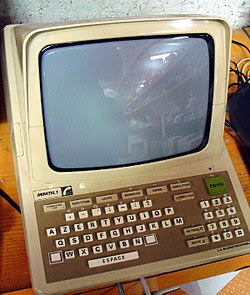 25 million users.  Pretty cool considering what you had for processing and telecom capabilities in 1980 - 1200 bps download and 75 bps upload (!).  The "killer app" was that France Telecom didn't have to print millions of phone directories, because they were all online.

Essentially, it was the largest bulletin board system (BBS) ever created.  I once installed a linux Minitel client, just because I could (and for the retro chic of it all).

Of course, it was nothing but retro chic.  The 'Net has been a far better search engine than Minitel for perhaps half of this 30 years.  Rather than move its subscribers to the newer, better, faster, cheaper Internet, France dumped billions of francs into the system because it was French, and not created by those cowboy anglophones.  That was a very French solution, but it seems enough is finally enough.

Me, I blame George W. Bush.
Posted by Borepatch

Labels: i am a nerd, techpr0n, Teh Intarwebz

They would make excellent active targets.

I'd love to see what ICs that terminal used. I was helping develop microprocessor designs back then.

At my first full-time job we had a terminal that would let you create and edit up to 1 KB of text before transmitting it, all without a processor.

Dave H, I'd bet cash money that there was a 555 timer involved.

BP: No bet. It's probably driving the beeper.

much like Cartesian Logic, the Minitel was considered good in France because it was French, not because it worked or made sense. frog logic, donchaknow.

I had no idea that Minitel was still running! I remember reading when it began and how the cool kids were crazy about it. I was still in South America without a regular phone in our household.

I was amazed when the french finally shut down the vacuum postal system in Paris. I was a youngster when it happened but I thought "how could they get rid of something so NEET."