"Each one of those markers is a monument ...

Ronald Reagan looked back on our Armed Forces, and asked the question Where do we find these men?  He then answered it: Where we've always found them in this country: In the farms, the shops, the stores and the offices.  The American Armed Forces have always been made from the stuff that makes up this Republic.

But there's a difference between them and the rest of the Citizenry, a difference summed up by the (original) Code of Military Conduct:


I am an American fighting man. I serve in the forces which guard my country and our way of life. I am prepared to give my life in their defense.

Both the Nazis and the Imperial Japanese looked with contempt at the American Fighting Man.  Both of their cultures valued racial purity, reinforced with a psychology of the ubermensch.  Both viewed America - correctly - as a mongrel race.  We were the natural enemy, because our success wasn't just a challenge to their ideology, it was a rebuke to it.

Today we face a different adversary, one who fights from the shadows instead of in Panzer Divisions, but who is no less lethal for that.  This enemy too sees us as corrupt, inferior to his "higher" philosophy.  A rebuke, even.

Both then and now we have had fighting men and women who have shown our enemies that the situation is more complicated, and painful for them.  Men and women who have seen this Republic through some very dark days, but saw that we came out right side up.  A lot of those men and women never saw the conclusion to the conflict, finding instead whatever small comfort in knowing that they lived up to that third sentence in the Code of Military Conduct.

This day, we remember them.

I would say something profound, except it's already been said.


I am prepared to give my life in their defense.

Again, I think I should say something profound about that sacrifice, but once again it has been said:


Where do we find such men?  Where we've always found them in this country: In the farms, the shops, the stores and the offices.  They just are the product of the freest society the world has ever known.

And they promised that they'd die for us, if that must be their fate.

May this Republic be worthy of their sacrifice, and that of their families. 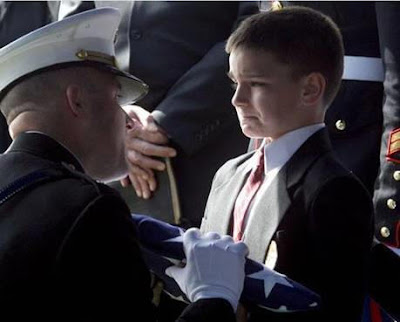 "We were the natural enemy, because our success wasn't just a challenge to their ideology, it was a rebuke to it."

My favorite sentence of the entire day.

What a great post. I think the last sentence says it all, "May this Republic be worthy of their sacrifice, and that of their families." Have a great Decoration (Memorial) Day.