Boys, I only did my duty; the old flag never touched the ground!

July 18 is not May 23, even in the Mayan calendar.  But it comes close in the calendar used by the U.S. Army in the second half of the nineteenth century.

On July 18, the Massachusetts 54th Volunteer Infantry assaulted well-entrenched Confederate infantry at Fort Wagner, South Carolina.  This has been well depicted in the outstanding film Glory:

The 54th Massachusetts, of course, was a Regiment made up from African Americans.  It was said that those "boys" (as they were called at the time, and indeed were called up until my lifetime) wouldn't fight. 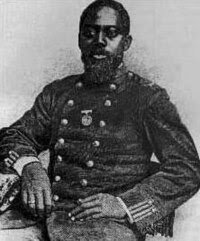 Those Men fought, and fought like demons.  And when the Color Sergent was shot down, Sergent William Harvey Carney caught them before they fell.  He kept them for the rest of the battle, waving them from the parapet of the fortress to rally the troops until the retreat was sounded.  Then he brought Old Glory back to friendly lines.  He never let it touch the ground.

The fastest way to get your ticket punched to the Hereafter during the War Between The States was to carry the standards.  You made the natural rally point for your side, which made you the natural aim point for the other side.  To expose yourself was expected in that maelstrom, but strong men were unashamed to let someone else bear the Colors.

But not William Harvey Carney.

It was a day when racism was easy, and everywhere unashamed.  And so Sgt. Carney had to wait almost 37 years for the recognition that was his due.  Delayed by the odd U.S. Army calendar I've spoken of, he was awarded the Medal of Honor for gallantryabove and beyond the call of duty on this day in 1900.  While his was not the first MoH awarded to an African American, his deeds of valor were the first so to be recognized:


Rank and organization: Sergeant, Company C, 54th Massachusetts Colored Infantry. Place and date: At Fort Wagner, S.C., 18 July 1863. Entered service at: New Bedford, Mass. Birth: Norfolk, Va. Date of issue: 23 May 1900. Citation: When the color sergeant was shot down, this soldier grasped the flag, led the way to the parapet, and planted the colors thereon. When the troops fell back he brought off the flag, under a fierce fire in which he was twice severely wounded.

Delayed, but not denied.
Posted by Borepatch