Me and the ACLU


A state government anti-terrorism agency placed the Tennessee ACLU on a map of “terrorism events and other suspicious activity” for sending a letter warning public schools not to celebrate Christmas as a religious holiday.

RTWT, but basically they're on a Homeland Security "Terror" map because they believe all that Congress shall make no law respecting an establishment of religion nonsense.  Clearly up to no good.

And so in the interest of solidarity, I offer the ACLU non-exclusive, free use of the following logo (clicky-clicky for the backstory).  Display it proudly, brothers.  Up the system!  Power to the People!  Come the Revolution, you'll all not establish religions, all day long! 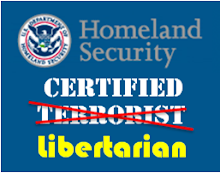 Will the last Progressive please turn out the lights over at Freedom Central?  I mean, we can't have freedom of speech interfering with your grand visions, can we?  And besides, all this untrammeled power you seem all comfortable with wouldn't ever be abused if a Republican gets elected, right?

Via Unc.
Posted by Borepatch