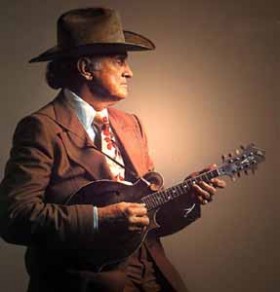 Monroe was a synthesist - he had many influences that formed the nucleus of what would become Bluegrass, from old style Country and Western to Blues.  Years of experimentation led to some early recognition, including record deals and a steady spot at the Grand Ole Opry, but what made the whole style gel was when a young banjo player from North Carolina named Earl Scruggs brought his three finger picking style to the high tempo, high octane fuel that was the Blue Grass Boys.

1946 and 1947 were the breakout years, when Bluegrass blossomed under Monroe's direction.  He recorded perhaps two dozen of what would become Bluegrass classics, including this song.  Strangely, it was originally a slow waltz, but when Elvis recorded a rockabilly version in the 1950s, Monroe reworked it into the form we have here.

In 1966, Kentucky made him an honorary Colonel.  He's one of only five people who are in the Country Music Hall of Fame, the Nashville Songwriters' Hall of Fame, and the Rock and Roll Hall of Fame.