I posted yesterday about how the "Shoot To Reset" trigger technique did a whole world of good for my groupings - and especially for my speed.  Here's how it works. Apologies for the lousy picture quality - taken in low light with my iPhone camera and blown up.  This is the first stage, where the finger is just placed on the trigger, but before any slack is taken up.  Notice in particular the large amount of white space behind the trigger in this photo - that's a testament to just how far you have to move the trigger to fire the pistol.

Obviously, make sure that you're following the 4 Rules when you do this. 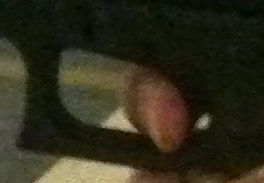 This is the second stage, where the trigger has been pulled back to the trigger break, the hammer falls on the firing pin, and the round heads down range.  Notice that there's almost no white space at all behind the trigger.  Moving the trigger across all that white space gave all sorts of opportunity for the muzzle to drift off target (or more likely, be pulled off target due to my poor mechanics).

But unless you're firing a fully automatic weapon, you have to release the trigger before you can shoot another round.  If you release it all the way, you have reintroduced all that white space that you'll have to cover.  This is where Shoot To Reset comes into play. 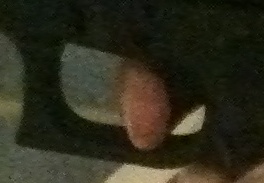 This is the third stage, after you've released the trigger to the reset point.  On the Glock, you could both feel this in the trigger and hear a click when the reset point was reached.  Notice that there's no slack to take up - the white space behind the trigger here is much smaller than in the first picture (maybe only 40% as big), but you're still ready to fire.

So what does all this mean in a practical sense?  I shot four magazines (shown below; note that the last one - on the right hand side - was where I was doing a different experiment with my grip, and so should be ignored).  The three of interest were an initial slow fire ("take all the time you want") control group, and then two groups of medium/quick fire (no slower than one round per second). 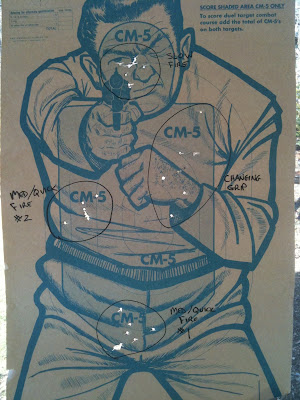 Both of my medium/quick groups are the same size as the slow fire control, which I found to be nothing short of astonishing.  The second of the med/quick groups might have even been slightly smaller than the control (!).

Remember, this was the first time I'd ever done this - my first 20 or so shots using this technique.  If you're like me, it'll work for you too.

UPDATE 17 February 2011 11:53: Welcome visitors from Say Uncle!  You might want to follow the link to by first post on Shoot To Reset,  which has a bit more on the subject.

I also shamefully forgot to thank Sam at the Roswell (GA) Sharpshooters USA, who took the time not just to describe the theory to me, but to work with my mechanics as well.  Very much appreciated, and highly recommended.  Anyone who can make me shoot decently is a Higher Being; if you're in the market for this sort of thing, you can do a lot worse than seeking him out.
Posted by Borepatch

I like the new, "EVEN MORE GUNS!" Borepatch--he's even better than the old "MASSACHUSETTS IS DUMB!" version.

Guns and PICTURES of gun!

I'm with Bluesun on this. What a great development.

Short video talking about trigger control and what it means.
http://www.youtube.com/watch?v=MPETPy0GRXg&feature=related