Woman marries fiancée who helped pull her from earthquake rubble:


Three days after being dragged frightened and dirty from the rubble of the Christchurch earthquake, Emma Howard walked down the aisle in a flowing wedding dress.

Emma, 23, married Chris Greenslade in a church ceremony in a Christchurch suburb, pushing aside memories of lying trapped in a foetal position for nearly seven hours in the collapsed Pyne Gould Corporation building. 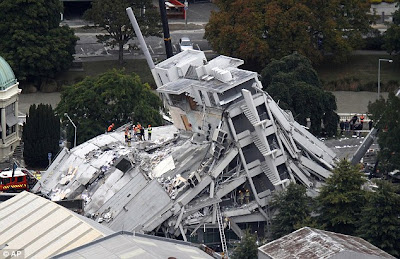 Mr. Greenslade communicated with his bride-to-be by SMS text messaging:


Unable to move, she sent a text message to Mr Greenslade, 25, who is also an accountant. He raced to the building from his nearby office and stared in horror at the devastation.

Miss Howard said: ‘He just ran and expected to find me standing on the street. He was ready to take me home.’

Without hesitating, Mr Greenslade began digging into the rubble, pulling out other victims as he searched for his fiancée. 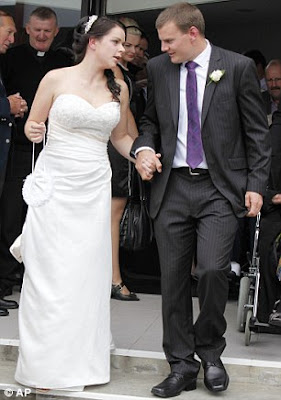 And the new Mrs. Greenslade seems quite remarkable as well:


Ms Howard said going ahead with their wedding was a sign that the disaster could not break people's spirit.

Brava to her as well.  Best wishes to the happy couple for a long life of somewhat less urgent excitement.  And our prayers go out to New Zealand in this time of mourning and, for the Greenslades, rejoicing.


And there is no trade or employment but the young man following it may become a hero.

Typical man, marrying the first thing he can dig up :P

Seriously though, that's swell, and I'm glad that she is on her feet so soon thereafter.