Ten years ago, I posted this.  I sure have enjoyed having this.

This is my Rifle

There are  almost none like it, but this one is mine ... 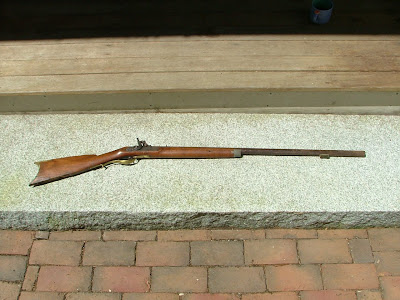 When I was a kid growing up, there was a storage trunk in the basement. A trunk with a gun.

It was quite safe - not only was the barrel separate from the stock, there was no ammunition, percussion caps, or powder. But it was a gun nevertheless. Great-grandfather's gun.

I thought that it was Great-Great-Grandfather's Civil War musket, that he had carried with Sherman through Georgia. Kind of interesting when I lived in Roswell, where Sherman had burned the mill. To this day they hate him - maybe it was less burning the mill as it was packing the women folk up on trains and sending them to prison camps in the north. Don't think that Great-Great-Gramps had anything to do with that, but you never know.

Last week when I was in Washington DC, I stopped at my older brother's house to see them. I drove it back with me because after all, I'm the shooting nut of the family. I hadn't seen it for thirty years, and so was surprised when I unboxed it.

This is no Civil War rifle. It's a hunting rifle. Percussion cap, second half of the nineteenth century, but it's clearly not military. There are no markings on it, other than an engraving of some birds. 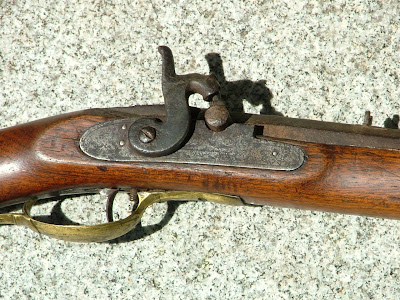 So dad and I had a chat on its history. He found it in his Grandfather's house, back in the 1930s. He thinks it was originally his Great-Grandfather's rifle. Says he was told that it took the last deer in Elk county, Kansas (one of the probably thousand rifles that took the last deer in Elk county, no doubt). Family tradition is that there's a ball stuck in the barrel. I don't think that I'll poke around to find out about that ...

It's sadly abused. The stock is broken in a couple of places, likely when the barrel was removed. My plan had been to get it repaired, when I thought it was a Civil War rifle. Now, I'm not sure. I'll probably reattach the barrel so that I can hang it on a wall, along with its powder horn.

Historical value? Probably none. Family value? Immeasurable, at least to me. My family never came from money, and this put food on the table, nourishing past generations of the Borepatch clan. It's earned a place of honor.

My rifle is human, even as I, because it is my life.

Thus, I will learn it as a brother.

Get it checked out, BP. If that rifle is a member of the family then treat it so! Carving and inletting a new stock is do-able... just time consuming. Any smith should be able to handle the hardware issues. The shades of your ancestors would be tickled pink at the thought of you restoring it, I'm sure.

What a wonderful find. It's my scholarly conviction that this smokeless powder crap is naught but a passing fad. Eventually, the real men of the sport will return once again to the manly propellants like the Holy Black!

Which reminds me - I seem to have let my hawk and knife tossing skills deteriorate. I don't know if I can still light a campfire, come to think of it. Think I better take a quick trip down the black powder trail sooner rather than later. :)

Where the heck is Elk County that it doesn't have any deer. They are everywhere, including downtown Kansas City.

Plenty of personally owned guns were used during the Civil War, especially by the Southern States. Likely near impossible to say one way or the other for many of the surviving relics of that era but supply and demand was largely in charge back then ... desperate times required desperate measures.

Whatever the untold truth happens to be, that rifle is a double handful of history.

It looks like a single trigger in a double set guard - My guess is that it was a budget gun, like many were. I'd try to make it shootable, but then that's me.

Fix it and learn to shoot it well. Also, learn how to make your own black powder. Therecipe is in the military manual 'improvised munitions'