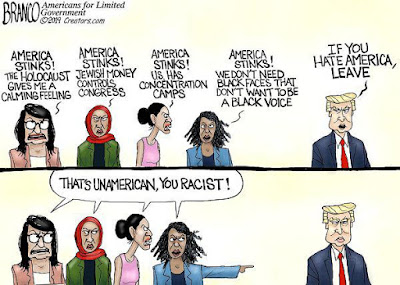 Trump is playing the Democrats like a fiddle.  He is forcing the spotlight of public attention on their most extreme members who are poisoning the public's view of the entire party.  And until a clear nominee emerges as a front runner they will all have to grit their teeth and let him do this, because they can't afford to risk alienating the left wing - that's where all the energy is now.  By the time the election shifts into high gear a year from now the party will be radioactive to voters.  Even moderate democrats will have an uphill battle against this perception.

I'm actually almost speechless about this.  Almost.
Posted by Borepatch

It is honestly hilarious watching all the people running around like chickens with their heads cut off, completely unable to see that "Trump is playing the Democrats like a fiddle."

I mean, it's so bad I'm at risk of catching that lung disease that normally only people who work in a popcorn factory for decades get.

Yep, getting the 'truth' of the Dems real plans... I still like the laser/cat analogy...

1st rule of a Trump twitter attack - He knows what he is doing, miss-spellings aside.

2nd rule of a Trump twitter attack - wait 36 hours before deciding a TTA is a bad thing, as affects from a TTA take a while to surface.

3rd rule of a Trump twitter attack - sit back and enjoy the Covfefe as leftist heads explode like fireworks.

4th rule of a Trump twitter attack - seek medical help if your schadenfreudistic swelling of certain parts lasts longer than... nah, just sit back and enjoy the winning!

Totally enjoying the Dems and Dem Socialists tearing each other apart and going even further leftist whenever Trump tweets. What's next? Can't wait!