I was out on the Motorcycle, and while waiting in traffic saw a hand lettered sign "Used Book Sale".  Well, I'm constitutionally incapable of passing that sort of thing up, and so pulled into the parking lot.  It was the Milton (GA) Library raising money.  It was late in their display time, and so most of the selection was pretty well picked over.

Fortunately, my tastes are a little (ahem) eclectic.  I cruised over to the history section, and saw this: 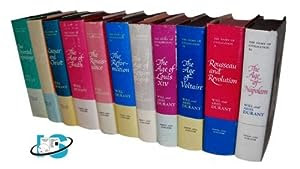 That's The Story of Civilization by Will and Ariel Durant.  10,000 pages of Pulitzer Prize winning overview of Western Civilization.  Alas, they did not have Volume VIII (Louis XIV), but I scooped up the rest for a buck a book.

I expect that this is the best deal in learning ever seen on the face of the earth.  Amazon has used sets from $85 or so.  I firmly believe that if you were to read this cover to cover, you would be better educated than 99.99% of anyone you will run across.

And note to self: saddle bags for the bike are a good idea, but don't size them for 10,000 pages of Western Civilization.  You probably won't run across this sort of cosmic win again.
Posted by Borepatch

Labels: history, i am a nerd, made of win, me me me

I picked up first-edition hardcovers of every Tom Clancy novel out at the time at a library sale...paid a buck a book.

Bully for you!
Now find a Great Books set any you'll be set!

good score. something to read on those cold winter nights.

Got you beat--my aunt GAVE them to me when I graduated high school. I still have them (and my K&E slide rule, which will give you an idea of my age). I've never read them all cover to cover, but I read from them a great deal. The Age of Louis XIV, and The Age of Voltaire give you an idea of the intellectual ferment that fueled the American Revolution like nothing else I know of.