René Magritte is perhaps my favorite painter, relentlessly clever and ever so sneaky: his works sucker you in to real intellectual challenge because they're just plain fun.

He was a Belgian impressionist painter who quickly took a turn to the surreal.  Unlike most surrealists (*cough* Salvador Dali *cough*), his works kept one foot in the sane world.

He is best known for his painting of a tobacco pipe, done in the style of the ubiquitous tobacco advertisements of his day.  The painting had a bold script reading Ceci n'est pas une pipe (this isn't a pipe).  It's a reference that you stumble across rather a lot, foreshadowing complaints about Madison Avenue and stupid adverts by decades.  The title of the painting is not widely known, but should be: The Treachery of Images.  As Magritte said about the painting, "Of course it is not a pipe.  How would you fill it with tobacco?"


This one used to hang in my apartment.  It got pretty beat up, and sadly got tossed some while back. 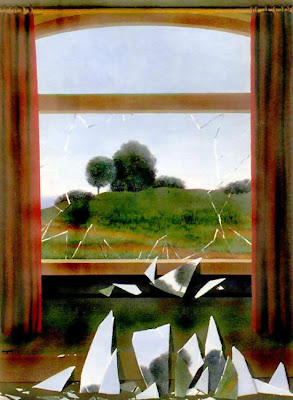 Many of his paintings included men in overcoats wearing bowler hats, most famously raining down on a city from the sky.  It was the inspiration for this delightfully playful (dare I say Magrittesque) scene from the remake of The Thomas Crown Affair.

René Magritte died on this day in 1967.  Thanks for the intellectual challenge, René.  And for all the fun.
Posted by Borepatch

Great point, and I remember laughing my ass off at that scene when the movie came out! Thanks for the memories!

Awesome movie. Great music. An all-time fave. Love René Magritte too. Thanks for the reminder post.