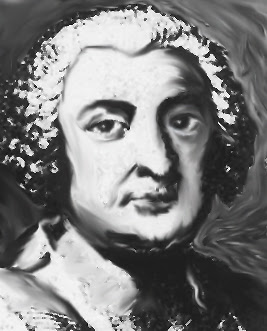 It's not clear that the Portuguese composer José António Carlos de Seixas was the greatest harpsichordist of all time.  It's also not clear that he wasn't, and we can pin that ambiguity on Mother Nature, more specifically on the earthquake of 1755 that devastated Lisbon and destroyed all but a handful of his scores.

What we do know is that Seixas was recognized as the greatest harpsichordist in Portugal, and when Antonio Scarlatti was visiting Lisbon, Infante (Prince) António himself introduced the great man to Seixas to give him lessons.  Scarlatti is said to have remarked that he could take lessons from his pupil.

The harpsichord, of course, is the precursor to the piano.  Rather than the key press causing a hammer to fall on the strings to make the tone, the harpsichord key press causes the strong to be plucked, as perhaps a harp or guitar might be.  The resulting sound is unmistakeable, and the compositions had to deal with the limitations of the pluck: where the piano can strike a note that will last for some considerable time, the plucking is much weaker and so the resulting note is much more short lived on the harpsichord.  The music is filled with trills, where adjacent keys are rapidly alternated - where a piano would simply have a long key press.

As a result, the music of the harpsichord demands a high level of virtuosity, one that Seixas supplied in excess.  He died on this day in 1742 at age 38 and most of his compositions were lost in the Lisbon disaster.  Even with this, he's considered possibly the greatest harpsichordist of all time.  Imagine his legacy had he lived the full life of a J. S. Bach with his scores safely archived in libraries across Europe.

What did survive the disasters were his keyboard sonatas, offered here.

Thought I left a comment Sunday morning, must have been an iPhone thing. (In other words, I didn't miss class, just din't fill in my attendance.

Great post as always, news to me about the harpsichord pre-dating the piano.

Will look up Seixas on Amazon, though a little harpsichord goes a long way with me.