We're constantly told that the public is stupid, especially about things scientific.  I'm not at all sure that I believe that.  After all, everyone lives in an actual, physical world, interacting with physical and chemical reactions every second of every day.

Sure, some are idiots, and win the Darwin Award lottery, but that doesn't necessarily mean that they don't know how gravity works, just that they ignored the implications.  Hey Bubba, hold mah beer ...

And so to the weeping, gnashing of teeth, and rending of garments over the rapidly falling belief in the Catastrophic Anthropogenic Global Warming (CAGW) - the proposition that climate is changing dramatically, and catastrophically, and that it's our fault.

We're told that the public are scientific ignoramuses, who lack appreciation for the subtlety of the climate computer models, or the "gridding" and "adjusting" modifications performed on the historical temperature databases.  Why, they simply won't listen to the Very Smart Scientists who are telling them that they have to reduce their children's standard of living, and that it's an emergency and ZOMG WE'RE ALL GONNA DIE!!!!1!!eleventy!!!!

Now why might the public be skeptical about all this scienciness? 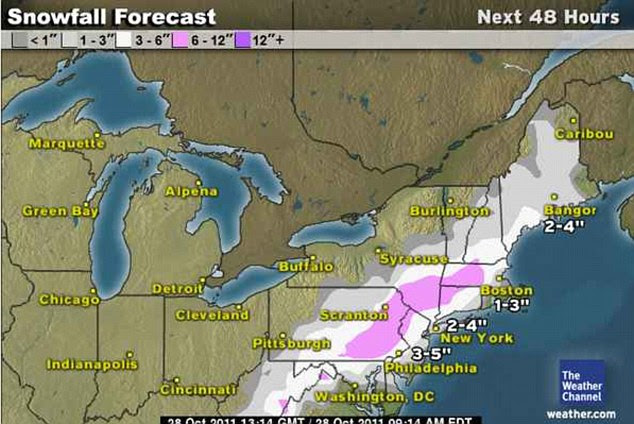 It's not even Halloween.

The public lives in a physical reality.  They see what is happening around them.  This actually helped the CAGW crowd in the 1990s, when a series of hot summers and 1998's super El Nino even convinced a lot of folks that it was getting hotter.  But since then, it's been getting cooler, and no amount of data fiddling is going to convince people that they aren't seeing record cold.

In a very practical sense, CAGW is being falsified for the entire Northeast seaboard this weekend.  Sure, sure - this is weather, not climate.  But riddle me this, CAGWman: if the Earth truly were warming, why wouldn't we be seeing records being set the other way - hotter records, late snowfalls, that sort of thing.

It's a cold dead fact that after a "century of warming" and the "hottest year in a millennium" that the highest recorded temperature in the USA happened in 1913.  You can look it up, even.

What a strange warming, that increases average temperature, but not record temperature.  And where we see record early snowfall.  You might almost wonder if the hypothesis was falsified.
Posted by Borepatch

Weather may not be climate, but climate is the average of the weather.

Observation and historical data proves "Gorebal Warming" is false. For example, back in the 1920s and '30s, Port Aransas, TX was known as the "tarpon capital" due to excellent tarpon fishing. This happy time coincided with a general warming trend that peaked around then. This is easily found in the Farmer's Almanac in graph form.

The same graph shows a cooling trend through the '40s, '50s, and '60s (remember "global cooling", next ice age coming, etc?), and the tarpon fishing petered out. It was blamed on over-fishing, but the reality is that the water got too cool for the tarpons' taste. And now we've been back on a warming trend the last few decades. Guess what? The tarpon are back! Funny how that works...

A related side note: I've lived a stone's throw from the Laguna Madre and the Gulf of Mexico for 28 years. The sea level has not risen at all.

Craig, the 30 year Pacific Decadal Oscillation sure maps cleanly into this up/down trend.

Rob K, the problem for the CAGW crowd is that the average is turning down.

It's a Hockey Stick thing.

To back up Craig in Texas a bit, here in Florida, the citrus belt has been moving south for about a hundred years. I've read about grapefruit farms in the Jacksonville area in the early 20th century; today, the Orlando area is on the northern border of where citrus farms are profitable.

Just in the 30 years I've lived here, record freezes in the 80s killed off much of the trees. There are some vineyards and grapes being grown in central Florida, with a nascent wine making industry. At least, it's allegedly wine.

A hundred years is long enough to separate weather - even the strangely warm decade of the 90s - from climate.

Which brings up a point: even the most ardent warmist will concede that the sun affects day to day weather, but they won't concede it affects climate. So where exactly does weather stop and climate begin?