But European Ruling Elites would never be that ruthless


Firstly, it is becoming increasingly recognised – most notably by the French and the IMF – that, in order for the Eurozone financial system to regain a modicum of stability, the ECB must step in and back the EFSF. In essence, the ECB must become a sort of unofficial ‘Lender of Last Resort’. If this situation comes about, the Eurocrats will have the ‘unlimited firepower’ – that is, the ECB’s ability to issue currency – with which they can essentially control the bond markets.

If the Eurocrats find themselves in this position they may well opt to keep the periphery bond markets on life support while continuing to insist on austerity… all the while, fully acknowledging – as laid out above in the secret document – what this austerity will mean in real terms: perpetual and unending suffering in the periphery.

Thus the Eurocrisis will be a financial crisis no more. Instead what we will have is the core countries tightening the vice of austerity on the imploding periphery. 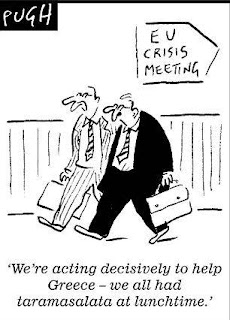 Because European Elites would never have dreams of a a vice-grip control over a continental empire.

And while we're talking about power grabs by the financial elite, the extra credit assignment is a 500 word essay on the implications of a generation of young people collectively holding a trillion dollars in student debt that can't be discharged in bankruptcy.  The best essay gets an extra 4 inches added to the pelt of their wookie suit.
Posted by Borepatch