Standing Outside Looking In writes about guns, freedom, and prepping.  He also posts what the real Woodstock was all about.  Heh.  Plus, he has this T-shirt: 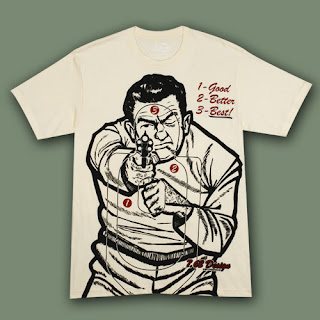 Naam Bplah blogs from Thailand.  By his own admission, he's your one-stop shop for Fish Sauce blogging.  More seriously, he writes about the massive flooding that people are suffering through right now:


The Thai People keep on smiling all through this tragedy. They don't cry. They don't blame  anyone (Too much) They save the property they can. They move to higher ground. They take care of themselves. They don't ask or expect anyone to help. If you want to help, "Up to you." they would tell you.  They are self reliant unlike many liberal and low income cry baby American's who are egged on by CNN, MSNBC, AP, ABC and who have been sucking at the trough of public welfare their whole lives expecting and now demanding a hand out. American's could learn allot from the Thai's.

Perhaps he can post a link to some of the organizations who he thinks are doing good work to help out.  I expect that more than one of my readers might decide on that "up to you" bit.

In Search Of The Tempestuous Sea is written by someone who is a self-confessed "computer geek with too little patience, not enough time, and too few guns." I guess we run in packs, or something.  But it looks he isn't as tragically disarmed as he used to be:


After shooting CTone's Mosin Nagant, I decided I had to have one of my own. Seriously, for a little more than a C note, owning a bit of working history in a functioning, WWII-era, Soviet rifle is a no-brainer.

Nice pix of the new addition, there Andy.

Welcome to the blogroll, everyone!  If anyone has added me to their blogroll but I haven't added you, it's probably because I'm busy.  Send me an email, or leave a comment here.
Posted by Borepatch

Used to be that people would post blog additions on their blogs and I would think "Ooooh - someone new to read", but ever since I started the Gun Blog Black List with 350+ blogs on it the "new" blogs are starting to be few and far between.