The decline and revival of portrait painting

The Roman Empire fell hard when it fell.  Populations suffered big declines and art pretty much disappeared in the west for centuries.  Portrait painting was basically lost for a thousand years.  What's interesting is that portrait painting was a big, big deal in ancient Rome.  We don't know much of it because all but a handful of Roman portraits were lost.  I mean, two thousand years is a long time for a perishable object to survive, especially when waves of barbarians come through on periodic sacking raids.

YARGB points to a remarkable collection of Roman portraits, the Fayum Mummy portraits:


These are examples of Fayuum Mummy portraits. They're paintings, from the Hellenistic era Egypt, that were attached to mummies and are meant to depict the deceased. However, from the above link:


On first inspection the Fayum mummy portrait paintings look like true-life depictions of actual individuals, but closer analysis reveals that the 'individual' features are sometimes no more than repetitive, formulaic renderings. In other words, quite a few of the portraits appear to have been created from a small number of facial templates, disguised by the use of different fashions, hairstyles and beards.

Regardless, they are still the only extent collection of portraits we have of more common people of antiquity, rather than the kings and generals we usually see in ancient art. That said, it was still only the very upper crust of society that could afford them.

He has a collection of these that you can go look at, dating roughly the first century AD to the third century.  Egypt's dry climate preserved them in a way that wasn't there in rainier climes.  The level of expertise ranges from so-so to excellent, and it entirely disappeared with the Empire.

Here's another one that YARGB does not have.  My opinion is that this was the greatest portrait (that we know of) for 1500 years, faded by 1900 years.  It dates from around the reign of Emperor Claudius, or possibly Nero.

Clearly she was from a wealthy family.  She died young, a fate shared by the great and the common.  You have to fast forward to the Renaissance for similar workmanship.  Here's one by Robert Campin in the Netherlands around 1430: 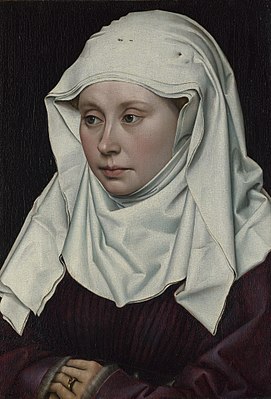 I find the Roman one more realistic - less formalized, or formalized in a less obvious way.  That may just be because Roman formalization techniques have been lost over time, while early Flemish formalization techniques are (relatively) fresh.  Interestingly, there are very few portrait examples much before 1430, and an explosion soon after.  The Renaissance really did come about all of a sudden.

Ironically, when Campin painted this portrait the Roman Empire still existed, although as a vastly shrunken ghost of its former self.  By 1430 the Empire was pretty much limited to Constantinople and areas around that.  It would be gone in another two decades.  Roman aristocrats fleeing the Turks would settle in Italy, taking their books with them.  Those books - of the ancient masters like Virgil, Horace, and Cicero - will further ignite the Renaissance and lead to today's modern world.
Posted by Borepatch

I am always smarter after reading your blog.

Really a rather intriguing post. I've never seen the fall of the Roman Empire to a long dark ages of portrait painting.

I'd like to travel more over there with a good guide to see more of Roman works (or I'd never find those things myself). I vividly saw, in the "old city" of Jerusalem, how the work the Romans did was a marvel, while newer buildings - often built literally on top of the Roman work - was of vastly inferior quality.

Deep on the West Wall (the Wailing Wall) there are blocks of stone that are calculated to weigh in the hundreds of thousands of pounds. They are so precisely positioned that you couldn't wedge a business card (.015") between them. In contrast, in other parts of the city, there are walls built during the Byzantine Empire. Those are much smaller, rounded rocks with thick layers of mortar to make them fit. Nowhere near the construction artistry of the Romans.

And don't be me started on the Roman mosaics...

"I've never seen the fall of the Roman Empire linked to a long dark ages of portrait painting."

Libertyman, thanks. You should follow YARGB; he's pretty dang smart.

Graybeard, the Roman mosaics are (at their best) incredible. And yeah, the Roman techniques declined pretty fast and hard after 550 or so. The Theodosian Walls saved Constantinople 4 or 5 times and couldn't have been built after 600 or so.

Fascinating. It looks like they were just a hair away from the artistic renaissance when the empire fell. The Egyptian ones were still caricatures... but you can see them beginning to flirt with hues, shadows and tones that marked the renaissance work.

I once read a shoddily done SF yarn predicated on a Roman Empire that didn’t fall. The author imagined an alternate history with the first space flights taking place in the 18th century and a vastly accelerated technical and scientific advancement.

Didn’t something similar happen during the Bronze Age? Where civilization collapsed?