French driver trapped for an hour in speeding 125mph car with no brakes:


The 36 year old was on a dual carriageway on his way to a hypermarket when the car's speed first jammed at 60mph. Each time he tried to brake, the car accelerated, eventually reaching 125mph and sticking there.

He used his call phone to call the police, who cleared the route ahead of him.  He kept going until his car ran out of gas.  He's suing the manufacturer, Renault.

As more an more of the car's major systems become computer controlled, we can expect to see more and more of this.  The computer software had some sort of glitch, but that's the nature of computer software.  There will be some rate of bugs per thousand lines of code.  The number will vary based on how much money the developer is willing to devote to quality; NASA was famous for a very low rate of software defects (you can't easily upgrade an OS that's orbiting Jupiter), but it didn't come cheap.  Most companies don't devote anywhere near this much money to reducing bug counts.

So how much did Renault devote?  Given that this is a pretty new field, and that manufacturers are rushing to add "cool" features like in-car WiFi and remote diagnostics and self-driving capability (ugh), confidence is not high that QA testing is high on their priority list.

Worse, it's likely that the engine shutoff is computer controlled, and so you might not even be able to turn the car off when it goes all Christine on you.

No thank you.  I think that my next car will be one of these. 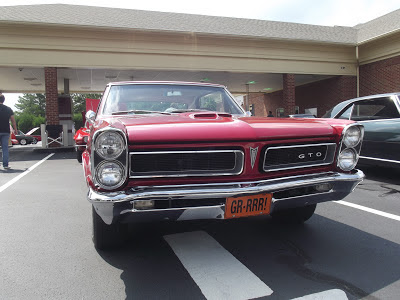 It wasn't designed by incompetents.  Can't say that about today's "drive by wire" Detroit Coffins.
Posted by Borepatch

My new truck, happily, makes hippies cry, but it has an electronic tag key- it's all fob, no actual key. I'm still looking for a way to replace it with a damn keyed lock w/out voiding the warranty so that it won't cost me $400 the first time I run my keys through the laundry.
I was able to turn down the first truck liked because it had OnStar, the second because it had built-in GPS w/o Onstar.

I've got a '72 Olds Cutlass for sale if you want a true computer-free experience. It only gets about 5mpg, but on the other hand it's about 500hp.

Get the Goat, I miss my old '94 F-150 with wind-up door windows, but the "computer" was just a POS glue-pot that regulated the ignition somewht in tune with a photocell distributor POS...

So, the driver had no way to put the car's transmission in Neutral?

aurictech beat me to it - gear selectors have an "N" position for a reason.

Wonder how much trouble it would be to install a Big Red Switch on the dash. Which, given the vagaries of kumpooters, not to mention the possibility of the system being hacked, might not be a bad idea.

Yes, this Paris experience is the natural and inevitable progression from the more primitive computer logic on my 1993 Olds Cutlass Ciera. Whenever I tweaked the windshield washer fluid control to get a shpritz of fluid on my windshield, I couldn't just do one single shpritz; the fluid had 6 spurts, and the wipers cycled back and forth 6 times. The only way to stop it was to kill the ignition and stop the car, which was not always an option when the car was in motion.

Once when some sand got on my windshield, it left some scratch marks. Another time, when the windshield got baptized by a seagull, it only spread the shit out and effectively blinded me while I was going [never mind how fast the car was going; I'll invoke my 5th Amendment rights on this one.].

And that was when the wiper/washer logic was working properly! Once I couldn't turn off the wipers at all without killing the ignition and restarting.

All of that wouldn't be so bad, EXCEPT that the up and coming generation of drivers are allowing the cars' computers to function in lieu of their brains.

In that it was equipped with handicap controls the hand brake was no doubt interfering with the throttle control. But that still doesn't explain why they didn't just shift to nutral. Or kill the ignition. Not a problem locking the steering wheel as long as you do not also remove the key. - which you generally can't do while the car is not in park anyway