It's what you don't see in the newspaper.  Stories that are too double-plus ungood to be allowed to see print - lest those whose faith in the Gospel of Progress is weak might begin to doubt - those are the tells.  Tacitus sees a tell on the funny pages, where the classic comic Peanuts finds some airbrushing:


Somebody appears to be messing with Snoopy. 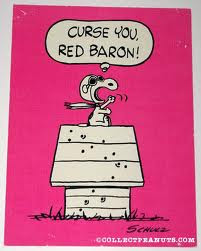 In a stunning display of Political Correctness the bullet holes have just been photoshopped away.  Evidently the Red Baron shot him down with harsh words.

This is dishonesty on so many levels.  It trivializes an important debate, that which seeks a balance between public safety and Constitutional rights.  It totally ignores the fact that Snoopy's flights of fancy were just that, imaginary expeditions where he could be heroic. This from a society where the default activity of many young people is video shooting zombies and storm troopers.  And finally, I will just say it, Peanuts in its prime was art.  When you start messing with art who knows where it will stop.  All those Renaissance crucifixion paintings.....will we start airbrushing the wounds in His hands and side?

This is a tell, that shows what the priests in the Cathedral think.  The number of shibboleths that aligned in the mind of the Latter Day Censor is telling indeed: firearms, the military, the heroic stories of Western Civilization.  All to be hidden, lest the weak of mind and faith begin to doubt.  Lest they begin to think Unapproved thoughts.

Tacitus delves into this with the care that you would expect of an amateur archaeologist, uncovering layers of meaning from the scattered detritus of the modern Progressive Empire.  What I find most ironic is that the priests who did this have no awareness of history, of what happened to other Priests in other times, Priests who tried the same silent airbrushing technique.

This is not the work of an editor confident in the persuasiveness of his philosophy.  That's the tell.
Posted by Borepatch

Seriously? They photoshopped PEANUTS????? That's a whole new level of low that even Dantes didn't envision!

I guess these will never be re-published: http://www.lil-abner.com/fosdick.html

So it's not just ME that noticed that... And I'm NOT going crazy...

Thought that looked funny for some reason. Nice catch.