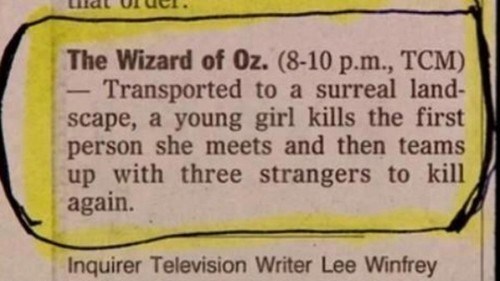 The fail is MASSIVE with this one.

You have GOT to be kidding me...

Sorry to burst all those childhood innocence bubbles, but TWOO was written by an atheist with the intent of creating a moral system for children with no need for God, and especially no need for a Son of God, a Christ.
Ever notice that Dorothy, while growing up on a small farm in rural country, nor the family who raised her, nor her allies, nor her enemies, nor any other character in the story, makes not one reference to God, the Divine, to Jesus, or to the Bible?
She prays not once in all her despair and danger.

Author L. Frank Baum also intended the obvious blurring of the Divine separation of Man as above all other life.
What's that, you say?

Think about how easily and quickly Dorothy accepts that an animal, a machine, and a bag of straw are all equal to her in every way. The story emphasizes that Dorothy embraces their problems and dreams as her own, and includes their needs with her own as of worth.
No matter the nature, no matter the form, if it acts in human-like ways, it is Human.

Such erasure of the distinction of Man as the only creature made in the image of God, filled with the Spirit and a spark of the Nature of God, is the very purpose for which the story was written.

The story cycle and the film are at best silly, wasting the time of too many people.
At worst, they are intentionally anti-Christ propaganda based on paganistic superstition and magical rituals as a basis for moral decisions.

Might I suggest the tinfoil hats made from the reclaimed asteroid aluminum? They seem to work best.

Its a kids story. What kind of a kids story would have the main character analyzing the true meaning of humanity and questioning the human-ness of her non-human companions ? Last kids movie I watched included an anthropomorphized meercat for chrissake. What was that supposed to symbolize? I don't remember any praying going on in that movie, either, but there was a lot of defference to a circle of light. Pagan/atheist conspiracy? You be the judge.

In sum - OMG teh atheists!!eleventy!!!

I've heard of tinfoil hats, but Unknown seems to be wearing a full-size helmet.