How we win the Gun Control debate

Robb likes to say that when arguing gun control we argue facts and figures and they use penis jokes.  I think that I just figured out why this is.  Actually, Aretae figured it out two and a half years ago, and I'm only now catching up.

(Actually, that's batting above my average for catching up to a guy as smart as Aretae.)

Along the way, it also explains the mystery as to why seemingly humane environmentalists would let third world babies starve to death.  Actually, that's where I started my search - figuring that Aretae would have something that would make me think.  Boy, howdy, he sure did.


I claim that there's a simple, easy grand synthesis that explains human behavior in 3 words:

[blink] [blink]  I hate being slow on the uptake.

None of these people know the facts, none have logic on their side.  Their celebrity appeal is to Monkeybrains.  To status.

Not everyone on our side is as slow on the uptake as me.  Buckeye Firearms Association brings some Righteous Monkeybrains to our side:


Clint Eastwood: "I have a very strict gun control policy: if there's a gun around, I want to be in control of it.")

James Earl Jones: "The world is filled with violence. Because criminals carry guns, we decent law-abiding citizens should also have guns. Otherwise they will win and the decent people will lose."

If the NRA wanted to run an effective ad campaign, the Grand Unified Theory of Monkeybrains would suggest a series of ads targeting celebrity, cool, and status.  Ads like this: 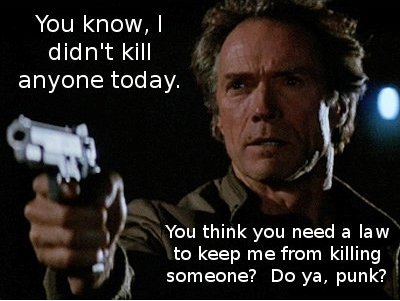 Get celebrities to line up to support gun rights.  Get the presenters from Attack Of The Show to go to the range with some of the celebrities, and talk about how cool it is.  Fight status with status.  We'll still have logic, and statistics and the rest.  But you want to really move the meter, you need the suburban hausfraus.  Angelina Jolie's ad sort of writes itself.  Run an ad like this in the women's magazines: 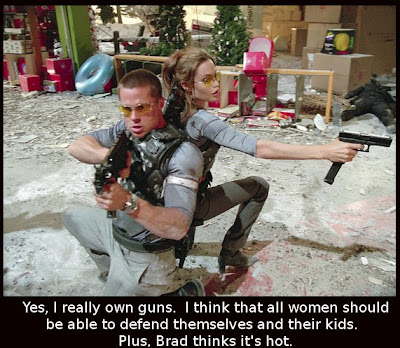 And before someone accuses me of shameless manipulation of emotion, let me just point out all the facts, statistics, and logic that we've been using are still there.  The other side doesn't have that, and so does shameless manipulation of emotion as their only strategy.  Okay, then, let's play the game both ways.  Nothing says that the ads can's point to a web page with facts, figures, and arguments.

But if Aretae is right here (and that's a dang good bet) then the facts and figures will be a post hoc rationalization of a decision that most people make based on status signalling.

I bet Oleg could put some righteous ads together.  Oh, wait - he already has.  These just need to start showing up prominently in Redbook and Ladies Home Journal and Cosmo. And Game Informer.
Posted by Borepatch

In case you hadn't noticed, I'm already playing this space. With a bit of ESR thrown in. See the last paragraph of this post.

The new game is mockery and gentle ad hominems:

"I recognize that you're too frightened by the prospect of responsibility for defending yourself and family, but some of us don't think we have a choice but to be responsible. I hope you join the ranks of the responsible sometime."

"I recognize that laws that prevent me from defending myself would make chicken-livered cowards who won't defend their children feel better about themselves, but it doesn't seem to do much for safety."

Ridicule trumps reason in public 'debates'. Ridicule is multiplied by control over the media. Only violence trumps ridicule. Old Southerners knew this, which is why they reserved the right to challenge you to a duel if you escalated from reason to ridicule.

Glenn Reynolds has suggested that instead of dumping all those millions into Mitt Romney's campaign, the GOP should buy some women's magazines.

It's the appeal to the low information, get all their news in sound bites, follow the Kadashians crowd that will doom us, or save us.