Hacking: your pad or mine?

Remember, only use your Powers for good:


The folks at security tools company Pwnie Express have built a tablet that can bash the heck out of corporate networks. Called the Pwn Pad, it’s a full-fledged hacking toolkit built atop Google’s Android operating system.

Pwnie Express will be selling the cool-looking hack machines — based on Google’s Nexus 7 tablets — for $795. They’ll be introduced at the RSA security conference in San Francisco next week, but Pwnie Express is also releasing the Pwn Pad source code, meaning that hackers can download the software and get it up and running on other types of Android phones and tablets.

Some important hacking tools have already been ported to Android, but Pwnie Express says that they’ve added some new ones. Most importantly, this is the first time that they’ve been able to get popular wireless hacking tools like Aircrack-ng and Kismet to work on an Android device.

“Every pen tester we know has a phone and a tablet and a laptop, but none of them has been able to do pen-testing from the tablet,” says Dave Porcello, Pwnie Express’s CEO. 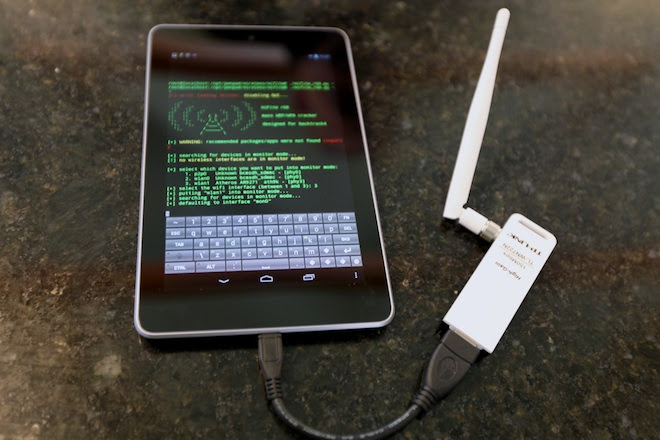 At that price point, there's really no excuse for companies not to be using it to test the security of their own systems.  It might be really interesting if you scripted things, so that the security guard could just carry one around on his patrols.  If the pad found any internal problems, it could email the security team.
Posted by Borepatch

BP, that would mean they actually had someone on staff that could actually USE it... Most companies now have contracted all that out, along with their security...

Old NFO, you're entirely correct. Which explains why so many companies get hacked.