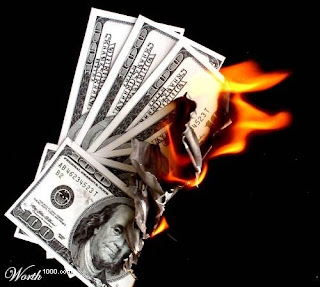 The Gormogons provide what may be the Grand Unified Theory of Safer Browsers and Government Healthcare service. Essentially, it boils down to the Fed.Gov procurement system being completely, utterly, irredeemably broken:

Follow me here: pressure mounts from savvy end users for an alternative web browser (since Microsoft STILL can't get a web browser right even after trying to claim that it was integral to the Windows operating system and couldn't be separated). In response to the pressure, some government program manager gets up the guts to propose adding Firefox to the baseline applications on the network. The contractor running the IT support desk waves their hands claiming that this is a change in scope to the contract and demands an ECP (Engineering Change Proposal). After the government spends thousands of dollars authoring a terrible RFP (Request For Proposal) for this change, the contractor spends thousands of dollars authoring a response to the RFP. The government contracting office then spends some more money evaluating the technical and cost aspects of the response. The proposal contains management reserve, engineering SWAGs (Seriously Wild Ass Guesses) as to the extent of the effort required, etc. And let's be honest, there are security issues identified periodically with Firefox and upgrades to apply, so some amount of work needs to be accounted for somewhere. So the evaluators (who mostly didn't know about Firefox or think about putting it on the network in the first place) think, "hey, this proposal is pretty good." Bam. Firefox 5.3 shows up on the State Department's network in 2012.

That's really how it works. No joke.

After I left Three Letter Intelligence Agency (since all the cool work was done by contractors, why not become a contractor?), I worked on a big DoD project that was run precisely this way. No work could be done without a Charge Number to account for what type of work you were doing. No work could be done that was not in the Statement Of Work. Half of my time was spent evaluating Engineering Change Proposals.

The project ended up $200 Million over budget and in Congressional hearings. Not my fault, of course, but why I've stayed away from any sort of work like that since.

Now I'm sure that there are all sorts of Really Smart Ivy League types out there who can explain - mathematically, no doubt - that with Government healthcare it'll be different. Really. The plan seems to revolve around having the Right Sort of People in charge this time, which - strangely - nobody has ever thought of doing before.

The Gormogons' posts are worth your time: both part 1 and part 2.

So Healthcare will be run by beancounters who are all about making it easy for the beancounters, instead of delivering service, and irrespective of the cost. However, it will be a great success, because it will be defined to be so. That project I worked on? It was delivered "in a shopping cart" - all the code, whether working or not. Someone scavenged the bits that worked, delivered it to the DoD Agency users, and everyone celebrated the "great new system".

Everyone celebrated except the users.
Posted by Borepatch