I only say "donkey" because I'm too polite to say "Jack@ss":

“I wasn’t working on Reggie Lewis the basketball star. I wasn’t working on a black man. I was working on another human being,” Sgt. James Crowley, in an exclusive interview with the Herald, said of the forward’s fatal heart attack July 27, 1993, at age 27 during an off-season practice at Brandeis University, where Crowley was a campus police officer.

Cambridge Sgt. James Crowley has taught a class about racial profiling for five years at the Lowell Police Academy after being hand-picked for the job by former police Commissioner Ronny Watson, who is black, said Academy Director Thomas Fleming.

"I have nothing but the highest respect for him as a police officer. He is very professional and he is a good role model for the young recruits in the police academy," Fleming told The Associated Press on Thursday.

Gates, however, says the Sgt. Crowley is a racist. So let's ask the question: Who has advanced his career by highlighting and exploiting race?

As a black intellectual and public figure, Gates has been an outspoken critic of the Eurocentric literary canon and has instead insisted that black literature must be evaluated by the aesthetic criteria of its culture of origin, not criteria imported from Western or European cultural traditions that express a "tone deafness to the black cultural voice" and result in "intellectual racism."

No wonder he sees racism everywhere, even in Cambridge. He's a professional. Meanwhile, Sgt. Crowley is being taught to keep his place.

Glad to see President Hopenchange leading us to that post racial future.

UPDATE 24 July 2009 10:06: Welcome visitors from View From The Porch, and thanks Tam! Take a look around. One thing that I didn't say in my post (but this is a great time to add) is that Cambridge, Massachusetts is Ground Zero for political correctness. You knew that.

But Cambridge has an African-American Mayor, Massachusetts has an African-American Governor, and you all know about President Hopenchange. Every one of them is a member of the same closed circle of lefty elitists as Gates. It's unsurprising that they've all closed ranks with this Harvard Jackass. I'd say disappointing, but my expectations of the lot of them weren't that high to start with.

I can't say that I'm a big fan of Unions, but this case is the poster child for why we need them - to protect the little guy from the Bosses. Good grief - I'm channeling Joe Hill. God save this Honorable Republic ... 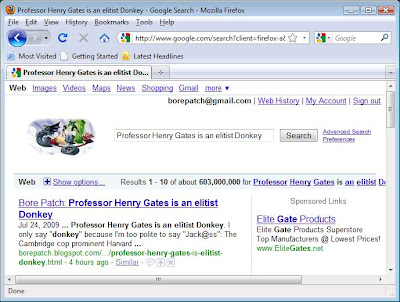 Update 25 July 2009 17:57: It's even worse. Boy, Howdy. Gates running a charity that raises hundreds of thousands of dollars but only gives tens of thousands in charitable grants?
Posted by Borepatch

It's like he is moving from group to group, revealing himself to be the prig that he really is inside.

I love that this is happening - even though the individual events make me angry.

The problem is that everybody is focusing on the race issue which is obscuring the real issue.He wasn't arrested because he was black he was arrested because he dared question the "authorities" and ticked them off.Wouldn't have mattered if he was white,black or pink with purple polka dots.Gates may have been a "Donkey" but last time I looked that wasn't against the law.
The real issue is not race it is about an officer abusing his authority because someone ticked him off.

The REAL issue here is that Gates decided to use the "race card" when HE escalated a simple on-scene investigation into a public disturbance outside his home.

In fact, when you consider what was happening, the police had come to *protect* the house of a black man! They didn't come to harass, attack, or burn a cross on his lawn. They came to investigate a reported break-in attack.

Gates is the one who acted "stupidly".

I have way too much on my plate to research Gates, but I seem to recall that he is one of those 60's revolutionaries that got educated and now thinks he is the cat's pajamas. All to happy to live and prosper in the Nation he wanted to overthrow.

I'm afraid that I'd be much more convinced if the Mayor were not stonewalling the Freedom Of Information Act request for the tapes of the incident (the radio exchanges were taped).

Note too that Gates wasn't arrested in his home, even though he was "questioning the authorities". He was arrested when he followed Crowley outside and continued his screaming. "Disorderly" seems an appropriate charge IMHO.

I think there are plenty of examples of LEOs abusing their authority - the guy in Ohio who was arrested for open carry, even though open carry is legal comes to mind. The more that comes out about Crowley and Gates, though, the more I think that the Cambridge PD has the patience of Job.

Gentlemen
I totally agree Gates is he took what should have been a normal routine call and escalated it by trying to play the race card when there was no evidence to support it.It was a idiotic and stupid but in my opinion (and evidently the DA's)it was not criminal.If the officer had just left I would support him 110% and I think it would have become a non issue.
Understand I do not support gates but the officer was wrong to arrest him and in my opinion it was truly for no more reason than because Gates ticked him off and while I sympathize he is supposed to be the professional and he failed to act like it.