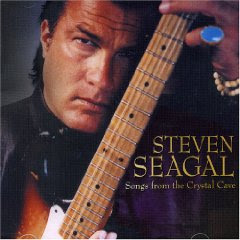 Steven Seagal's album, Songs from the Crystal Cave. Wikipedia is a little harsh:

Ouch. But not as bad as the reviewer comments at Amazon:

I must say, after several listens in the comforts of my mom's basement and while drinking unsweetened grape Kool Aid from a goblet I made for a lady friend who didn't want it nor me, this album makes The Beatles look like The Monkees. Mr. Seagal, who is able to hit the high notes as if he was eunuch, really made me yorn for the days of when The Torkelsons was still on tv. This man needs to go on tour sharing his gift like Tom Cruise shares herpes. Bravo, ol' chap. Bravo.

Quality snark served up right there.

He was/is a real Aikido master. There's video of him around that shows him teaching and demonstrating his skills. Acting and singing, well, not so much.

I have a Clint Eastwood cowboy-songs album that can kick Segall's butt. It's truly awful.