Ricky Skaggs - Pig In A Pen 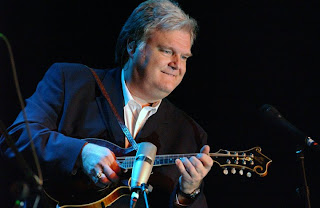 I was a slow child, when I was a teenager. That wouldn't have been so bad, except I was obstinate, too. Couldn't tell me nothin'.

I just knew, for example, that Dad's Bluegrass music was dumb. I mean, just look at how dumb the lyrics were (somehow I managed to conveniently gloss over 80% of Rock 'n Roll - Put the lime in the coconut).

It too me a bit to appreciate that Bluegrass isn't (often) about the lyrics; it's about the artistry of the performers on their instruments. Virtuoso performances.

Well, nobody does virtuoso instrumentals like Bluegrass, and not many do Bluegrass like Ricky Skaggs. It may be because he was performing by age six, but he's had fourteen grammys. Sometimes called the "Ambassador of Bluegrass", he performs with many other musicians, in many other genres. Most recently, he's done a concert with Phish, and released an album with Bruce Hornsby.

But he hasn't forgotten - or ignored - his Bluegrass roots. Here is is playing at about Mach 3, bringing down the house at the Boston Pops. Seems even a Harvard Man can get a little redneck on, even in Boston.